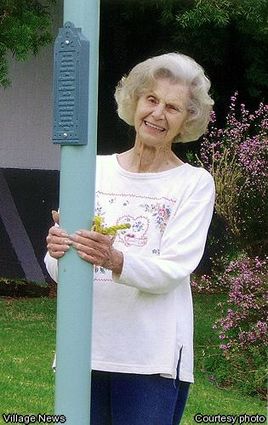 A standing-room-only crowd of family, friends and neighbors and members of business and major organizations in Fallbrook attended a memorial for Mary Jane Pfeil at the Fallbrook Golf Club on Friday, March 13. Pfeil passed away February 22.

They came to honor, remember and bid farewell to the small 93-year-old woman who was a legend in Fallbrook for her generosity, volunteerism and love of family, friends and community. Retired Pastor Jim Rich of Oceanside and Bill Riedell, Mary Jane’s brother, officiated. Joan Krupczak of the Fallbrook Woman’s Club delivered the eulogy.

Krupczak touched on Pfeil’s long and prolific life. Mary Jane was a member of the Fallbrook Community Planning Group (an elected position), on which she served for 20 years. Pfeil was past-president of the Republican Women’s Club. She was an active and generous benefactor to the Friends of the Fallbrook Library and co-founder of the original Fallbrook Hospice.

She was past-president of the Fallbrook Woman’s Club and a member for 30 years. For the club’s 100th anniversary, Pfeil donated a 100-year-old El Camino Real bell that now hangs at the entry to the clubhouse. According to Krupczak, she envisioned children visiting the bell when they studied California history. An avid supporter of education, she said she learned something new every day. The club has established a Mary Jane Pfeil scholarship fund in her memory.

Krupczak’s poignant and sometimes humorous remarks reflected Pfeil’s love of animals, her independent and determined nature, which included continuing to drive her tractor until it “gave out” two years ago and her fearlessness in climbing up on the roof of her house to fix the shingles or the ladder to decorate the Christmas tree at the club.

How to make tea without Mary Jane, or prepare the table decorations for the monthly meetings, was a part of the recurring theme, “Mary Jane, We’ll Miss You.” Family members, friends and neighbors also shared “Mary Jane” stories.

Pfeil is survived by a brother, Bill Riedell, and his wife, Edna; nephews David and James Riedell; and nieces Denise Lindgren and Joni Berg. She was preceded in death by her husband, Jack Pfeil.