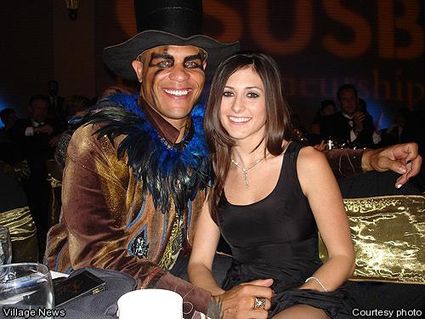 Twenty-three-year-old Lacy White, a 2003 graduate of Fallbrook High School and 2007 graduate of Cal Poly San Luis Obispo, was injured during the early morning hours of March 11 in a Newport Beach collision that killed her boyfriend, celebrated entrepreneur Charles ‘Mask’ Lewis Jr., 45. The couple was living in Huntington Beach.

According to the Newport Beach Police Department, the crash occurred at approximately 12:57 a.m. on Jamboree Blvd. Lewis and White were traveling southbound on the thoroughfare in his 2004 Ferrari Modena when it came into contact with a 1977 Porsche coupe.

As a result of the impact, the Ferrari came into contact with the curb and hit a light pole, which came down on the vehicle. Lewis was pronounced dead at the scene and White, ejected from the vehicle, was taken to a local trauma center.

“It was a miracle that she survived,” said White’s grandmother, Billie Foli of Fallbrook.

The individual driving the Porsche left the scene of the accident but was found a short distance away by law enforcement officers. Jeffrey David Kirby, 51, of Costa Mesa, was charged with gross vehicular manslaughter while intoxicated. His passenger, Lynn Marie Nabozny, 32, of Newport Beach, was arrested for public intoxication.

White, hospitalized in Orange County, suffered internal injuries and a severe injury to her left arm. She is expected to return “home” to Fallbrook to recover.

“[Lacy] will be home soon where she can be assisted by her family,” said Foli. “We want everyone to know how much we appreciate the love and support we are receiving from the Fallbrook community.”

Foli said that Lewis was recently honored as 2008 Entrepreneur of the Year for Riverside and San Bernardino counties based on his success in the mixed martial arts industry. He was also the co-founder of the TapouT clothing line.