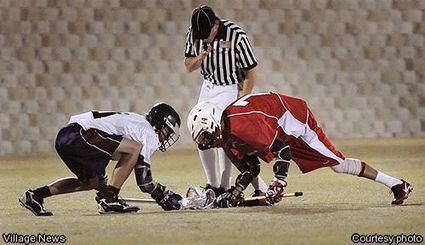 Warrior Seth Comer prepares for a face off.

On Friday, March 13, the Fallbrook boys’ varsity lacrosse team kicked off their season with a date against the Scripps Ranch Falcons. The 2008 season seemed like a distant memory as the Warriors showed maturity and a drastic increase in teamwork. The game turned out to be a nail-biter as the two teams battled it out until the final seconds of the match. Fortunately, Fallbrook came out as the victors, 11-10.

The Warriors began the game strongly with midfielder Devin Dixon winning the first face-off. Dixon set the pace of the game early as he worked the ball around the field to find a good shot at the goal. However, the Falcons found the goal first, three minutes into the game.

A few moments later, Scripps Ranch found the goal again to take a 2-0 lead. Then, Fallbrook’s Seth Comer stepped up and scored the Warriors’ first goal of the season. Fallbrook seemed a lot more comfortable late in the first quarter, as the offense took more shots and the defense put an end to the Falcons’ run. At the end of the first quarter, the Warriors trailed 2-1.

In the second quarter, Fallbrook struck first with a goal by senior midfielder Roman Brotherton. Then, the Falcons scored two straight to give them a 4-2 lead. About eight minutes into the quarter, Comer capitalized again and scored for the Warriors. After another goal by Scripps Ranch, Brotherton ripped in a shot with one minute left. The Falcons led 5-4 at the end of the first half.

The third quarter was highlighted by the return of the senior attack, Shaun Simpson. Early in the first quarter, he suffered a leg injury and had to watch from the sideline. As soon as he stepped back onto the field, he made an impact. Two minutes into the second half, Simpson zipped the ball into the net for another Fallbrook score.

After a Falcon goal, the Warriors scored two straight to take their first lead of the game. The third quarter ended with the Warriors ahead 7-6.

The final quarter began with Fallbrook’s Troy Monson scoring one minute into the period. Then, the Falcons scored two straight to even the game at eight goals apiece. Fallbrook goals by Simpson and Eric Jenkins followed.

After another Scripps Ranch goal, Simpson scored again to give the Warriors an 11-9 lead with one minute left. The Falcons obtained possession of the ball quickly and scored with 30 seconds left in the game. With three seconds left, a Falcon player shot the potential game-tying shot and Fallbrook goalie Mike Nichols stepped into the ball and saved it from entering the goal. The save earned the Warriors a hard-fought victory. 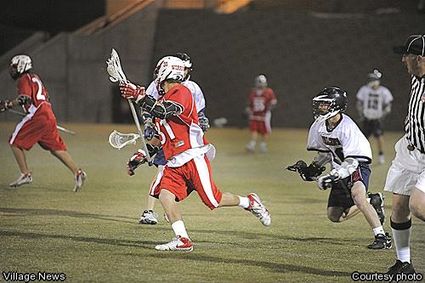 Senior Shaun Simpson works the ball around an opponent.

After the game, Dixon said, “Last year we weren’t a team and we worked together as a team today. That’s what it came down to: teamwork and skills. It feels great to finally win as a team.”

Simpson also mentioned that everyone, including the players who did not get to play, helped to earn the victory. He finished the game with four goals.

Fallbrook coach Al Schoffstall said, “This is a great way to start out the season, especially for the seniors. Everybody stepped up and contributed to the victory.”