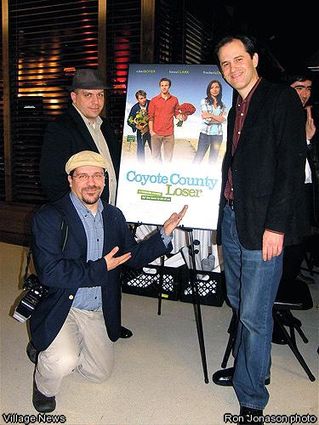 A packed house at the Landmark Theatre in Los Angeles gave a standing ovation recently at the conclusion of “Coyote County Loser,” a 92-minute feature film written by twin brothers Jacob and Lucas Roebuck, graduates of Fallbrook High School (FHS).

Friend and fellow FHS classmate Brian Jonason was editor and post-production supervisor for this romantic comedy of love and sacrifice in a small town.

Filmed in the beautiful rustic area of Roswell, NM, the movie focuses on Lauren, a local radio-on-air relationship expert whose love advice gets under the skin of Jack, a hot-shot Los Angeles disc jockey driving through Coyote County on his way to L.A. to accept the gig of a lifetime.

Lauren works for small-town desert radio station K-RAP, which is struggling to pay the bills. On-air dialogue between Lauren and Jack spikes ratings for the station and the battle of the sexes is on.

As the battle heats up, Jack and Lauren initiate a high-stakes contest to find Coyote County’s biggest loser and help him woo the county’s most unattainable woman. In the process Jack and Lauren discover the true nature of love and that it is for losers after all.

A clever story line, superb acting, excellent photography, great background music and editing have succeeded in producing a film for the whole family that emphasizes story rather than special effects. Young and old alike praise this “feel good” movie.

After FHS, producer/writer Jacob Roebuck received a Bachelor’s degree in broadcasting from John Brown University. He now teaches at John Brown and Biola universities. This is his first feature-length film.

The film’s editor, Brian Jonason, holds a Bachelor of Arts degree in film production from Long Beach State University. He has been an editor for the television shows “Charmed” and “Numb3rs” and has worked as assistant editor on two feature documentaries, “Derrida” and “Unprecedented: The 2000 Presidential Election.”

Other talent featured in “Coyote County Loser” includes Frederic Doss (“Transformers,” “G.I. Joe”), Nikki Boyer (TV Guide Channel, “Malcolm in the Middle,” “According to Jim”), K Callan (“American Gigolo,” “A Touch of Class,” “All in the Family,” “Lois and Clark: The New Adventures of Superman,” “Nip/Tuck”), Wayne Grace (“Dances with Wolves,” “Volcano,” “Twins,” “Far and Away,” “Seinfeld,” “The X-Files,” “Frasier”) and Beau Clark.

The film was directed by Jason Nauman and co-produced by Rob Bethke.

The Fallbrook team that created this film said they are pleased with the reception it has received in Los Angeles and hope to bring it for viewing at the Mission Theatre in Fallbrook.

To view a trailer for the film, go to http://www.coyotecountyloser.com.