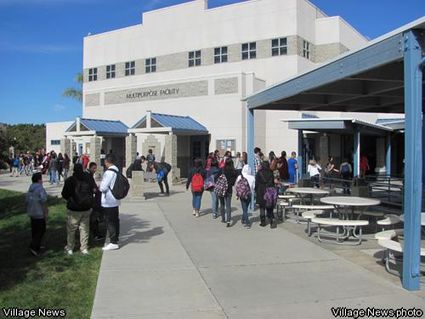 While students in grades 6, 7 and 8 now occupy the Sullivan Middle School campus, Bonsall

The Bonsall Union School District (BUSD) held a public meeting recently so that community members could be informed of the possible environmental impacts that would relate to a high school being established in the district.

According to BUSD superintendent Justin Cunningham, the Feb. 6 meeting was to allow people to see the results of the California Environmental Quality Act (CEQA), which is required by the state Board of Education in order to proceed with the unification process.

Cunningham stated that BUSD has been working on the unification since the district filed a petition in 2007. Students currently attending school within the district include families from Bonsall, Fallbrook (within the district boundary) and the Pala Band of Mission Indians Reservation.

“The Bonsall District is moving forward; this is not in our hands,” said Lora Duzyk, assistant superintendent of business services for the San Diego County Office of Education. “We don’t get involved until after the election [voting] process. The district is working on the process right now with its board of trustees and has recently finished the environmental impact study.”

Once the impact study has been reviewed by the public, the Department of Education will review information from the CEQA, in addition to the financial information provided by the district.

“The information will come from the second interim report during the year, which shows the fiscal impact for the district,” said Tom Krzmarzick, assistant superintendent of business services for the Bonsall district. “Since it’s been a year in the making, we will have to update the information and work with the County Office of Education. A lot of analysis will take place to provide details to make the decision.”

If the high school proposal is approved, Krzmarzick stated the district will use a four-year staggered approach to implement grade levels into the high school.

“We would start with ninth grade at Sullivan Middle School one year, then include tenth grade the following year, and so on,” said Cunningham.

The district had initially planned to restructure its elementary schools to include grades K through 8.

“We weren’t able to continue past the sixth grade when the budget went crazy on us about four years ago,” said Cunningham.

Because the district is not considering adding new facilities, the district will have a negative declaration of environmental impact.

If a high school is approved for Bonsall, the district would also have to offer a continuation high school. To meet those requirements, the district is considering buying property from North County Fire Protection District.

“The fire district has a station next to our property on Old River Rd., and they will be moving to a new location. We would like to purchase the property to locate a continuation school there if we successfully unify,” said Cunningham. “It’s not a new structure, so it’s not an issue of an environmental impact.”

The district will work with the Department of Education to get back on the California State Board of Education’s agenda in May or July.

“We are also in a historic situation with the CEQA process,” stated Cunningham. “Generally, the Department of Education would have paid for the process, but last year, they did not have the resources because their budgets had been cut. They asked if we would pay for our own CEQA, which is required before they could recommend an approval. We did that and went through the whole process. We even hired an attorney to help us with that.”

The district is in the process of the 30-day public viewing of the CEQA.

“Hopefully, the CEQA process will get a negative declaration,” said Krzmarzick. “This would mean we don’t need a full CEQA since all of our sites have had one.”

Krzmarzick stated that the California Board of Education would deliberate and rule on whether or not the high school proposal would have merit and move forward.

“Once they do that, the proposal will go to the County Office of Education, which will review it as well, and then we’d go on the ballot in November.”

Once the school unification has been approved, then the County Office of Education would appoint the current board of trustees as an interim board.

The high school Bonsall is hoping to implement would have an academic approach, said Cunningham.

“We have various schools in the region and we see different schools with choices like performing arts,” said Cunningham. “We want the academy to have a focus on technology and academics.”

Cunningham stated that a lot of hours have gone into the plans for adding a high school to the district.

“That includes the hours put in by folks working on this before I even got here,” he said. “I appreciate the work done by all the folks to set this up.”

The financial aspects of implementing a new high school are still being worked on by the district.

“We will cost out each year of the four-year process of turning the junior high school into a high school,” said Krzmarzick. “The other schools might not be K-8; they might be K-7. The short story is, the plan hasn’t been looked at into at that level of detail. There has been a lot of analysis and burning of the midnight oil. With a new school, we would be revising and modernizing facilities.”

“The board feels that Bonsall is enough of a community in itself,” said Krzmarzick when asked about the reasoning behind the unification of the school district. “We want to offer full continuum from kindergarten to 12th grade. Teachers can collaborate on different disciplines that could be a weakness, and they could also implement full service of education. The community will also have a sense of identity with a K-12 school district.”

If all goes according to plan, BUSD could begin implementing action with the plan of offering a high school in 2013 or 2014. Cunningham believes that there would be approximately 400 to 500 students in the high school.

“It would be a choice for parents and students,” said Cunningham. “We want to make this an easy as an impact as possible on everyone in the area.”

When asked how having a high school in the Bonsall district might be viewed by the Pala Band of Mission Indians, the Pala education representative declined to comment.

According to Fallbrook Union High School District superintendent Dale Mitchell, the loss of Bonsall students could impact the students that remain in the Fallbrook district in a negative manner.

“The information we have from our own study and analysis is that the implementation of a Bonsall high school would result in the loss of 600 students,” said Mitchell. “That makes the assumption that none of the students in the Bonsall district would attend the school in [the Fallbrook] district.”

Mitchell also said the district saw “no potential benefit” from having the Bonsall district unified, and that the district would continue to “pay attention and monitor the development.”

“On the down side, we would have fewer educational options for our children, and would offer less programs and options,” said Mitchell. “We have not invested a significant amount of time and energy determining the impact, but generically speaking, fewer students means fewer services, programs and staffing.”