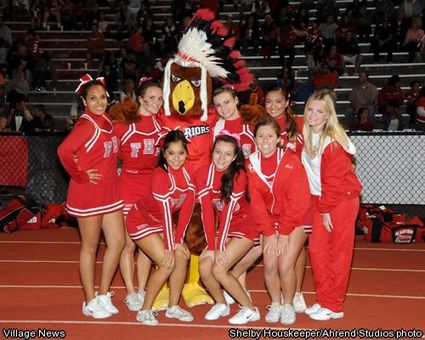 Lenon Bezzant looking at History of The Church of Jesus Christ of Latter-day Saints in Fallbrook, California that she wrote.

FALLBROOK - An Elder Daynes first tracked the Vista and Fallbrook, California areas in 1922. Elder Daynes was a member of the Boy Scout Troop #1, the first Boy Scout Troop organized in America. He was 19 at the time that he came to Southern California and was the grandson of Wilford Woodruff, who served as President of The Church of Jesus Christ of Latter-day Saints from April 1889 to September 1898. It took until 1944 to set up an actual church organization in the Fallbrook/Vista area.

In 1944 Linden (Lin) Woodruff Peterson was called to be the first Superintendant of the Sunday School in Fallbrook. In May the first meeting was held at Lin and Velma Petersons home at 1060 Old Stage Coach Road. There were thirteen people at that first meeting including six from the Peterson family. Lin and other elders took turns blessing and passing the sacrament. Lin taught lessons and Velma played piano. On the first Mother’s Day there were 35 people in attendance. The Petersons had meetings at their home twice a month until they felt they had out grown their home.

In the fall of 1946 they moved the meetings to the Odd Fellows Hall on Beech St. The members of the church were glad to have a building with more room, but they had to get there early to clean up and air out the building to have it ready for sacrament meeting. Velma was called to be the first Relief Society President in Fallbrook. Velma’s 1st Counselor was Helen Brown and her 2nd was Mary Peterson. The Relief Society had their first Homemaking Meeting and made lunch cloths, which they later sold to buy hymnbooks. In early 1947, Fallbrook was formed into a Branch, a small group of people who meet together in the Latter-day Saint organization to share in common faith and goals.

During this time the Vista people were going from home to home for Sunday School and Sacrament meetings. They would go to whatever home had the most room or they would travel to Encinitas, because Encinitas had a Chapel or travel to Fallbrook, and join in the meetings with the Latter-day Saints there.

In 1948 the Vista Sunday School was organized bringing together people from Oceanside, Carlsbad and Vista. They met at the Vista Women’s Club. Finally Vista had their own Sunday School without traveling to Encinitas or Fallbrook. In March of 1951 the Vista Branch was organized. The meetings that weren’t held at the Women’s Club, were held at the Grange Hall on south Santa Fe Ave. However, they had the same problem as the Fallbrook people did at the Odd Fellows Building, it had to be cleaned up before they could hold a meeting there. The branch began immediately to organize fundraisers for a new chapel. They held dinners at the Vista Recreation Center on a monthly basis.

Rhoda Wengren, Secretary of the first Relief Society in Vista said in her first notes after the Branch was formed, “We have been holding Relief Society in Vista since October, 1950, and even though a small and new Branch, we feel that we have been having good success. ......We have two new members who are not members of our Church, and we feel that through the Relief Society we have been able to do missionary work. One of these dear sisters died a few months ago, leaving a daughter with an incurable disease and although she isn’t a member and doesn’t belong to our church, the President or a Visiting Teacher calls on her each month and gives her the message which she seems to enjoy very much.”

Early spring of 1952 the Fallbrook Branch held the first meeting in the “New” chapel. The congregation bought the former American Legion Hall on North Main Street. The members knew it was only a temporary building and they began looking to the future and working to raise money for a “real” chapel. When there was work to be done the non-members could not be distinguished from the members. These non-members worked right along side the members to raise funds for a new chapel in Fallbrook.

The Fallbrook Relief Society started catering. Lenon Bezzant said, “There were no restaurants in town large enough to handle groups. We served the Rotary Club twice a month, the Lion’s Club once a month and we also served both clubs and their families Christmas Dinner. We earned a good reputation for bake sales bazaars, banquets for schools and wedding receptions.” The Relief Society turned in $2,000 in 1953, $2600 in 1954, and $2,000 in 1955 for the building fund.

Howard and Lillian Woodrow donated a plot of land on East Collage for the new chapel. The general church in Salt Lake City matched all funds. Labor was provided locally. The Fallbrook congregation was fortunate to have many men in the building trade among the members. Cliff Dapper did the grading of the site. Many members and non-members helped with the concrete work. Lloyd East was the Building Superintendent, and did much of the finish work inside. Lin Peterson and his crew put the roof on. Elroy Bezzant and his crew did the painting. Ervin Peterson helped inside and outside.

The Vista Branch purchased a 1.5-acre lot on Alta Vista Drive, for a new chapel. But, when California Mission President Henry B. Taylor visited the location and noted that there was not much room for expansion. He recommended that the branch look for another site.

The Vista Relief Society, following the example of their sisters in Fallbrook, began to hold lunches for the Lions and Rotary Clubs twice a week as a fundraiser for the new building. The sisters also catered meals for the Vista Riders, Kiwanis Club, The Vista Republican Club and Alcoholics Anonymous. These lunch services earned a total of $28,000 for the building fund. They held “Melodrama Night” at the Women’s Club with 12 different Vignette’s to raise money. The brothers helped to bring in “Rubinoff” a well-known violinist to play at the Vista High School, now the Lincoln Jr. High, as a fundraiser for the future chapel. They also brought in John Goodard to narrate his new movie “Devil’s Highway”.

In October of 1956 a five-acre lot was purchased at the corner of Foothill and Oak Drive to be used as a site for the Vista Branch Chapel. George Voigtlander bought the Alta Vista lot that was deemed too small, with the proceeds going to the building fund for the new Chapel.

The supervising contractor on the new Vista building was Lloyd East, a former President of the Fallbrook Branch. The youngest sub-contractor on the building was Gerald Riley. The Branch of Vista was made up of 88 people at the time they were working on the Foothill building and every single member contributed to the work in some way. The Relief Society brought lunches to the people working on the building and many of the women worked on the building. The first permanent pews installed were donated by a non-member, Charles Goff, who owned a local liquor store but would attend meetings infrequently. Goff was a friend of Vista Branch President Herman Allenbach.

The Vista Relief Society held the first meeting in the Vista Chapel. The meeting was in honor of the Relief Society Anniversary and was held prior to the chapel’s completion.

In 1958 a chapel could not be dedicated until it was completely paid for. The Fallbrook branch held a meeting to dedicate their new chapel. The branch could be proud of what they had accomplished, because they had completely paid for the new chapel. Velma Peterson spoke at that meeting saying, “As a group of sisters we are grateful for the opportunity we have had to help with building a chapel. It has been a very fine experience in many ways. There had to be unity, love and real desire to assist in this building project or we never could have done the work we have done.”

Two years later meeting was held in the Fallbrook Chapel to establish a Palomar Stake. One thousand people attended the meeting. This meeting not only established the Stake but it also changed many Branches to Wards. Two of those Wards that were organized at the meeting were Fallbrook 1st and Vista 1st.

The Foothill Building in Vista was completed and dedicated in December 1965. The congregation had held many meetings in the building before it was finished.

The “Block Program” for meetings began in March 1974. The “Block Program” was a way of having a three-hour block of meetings on Sunday. Prior to this time the meetings were spread throughout the week. The Fallbrook and Vista Congregations were somewhat prepared for this program because they had been having only one meeting on “Fast Sunday”, the first Sunday of the month. One reason for instigating this program at this time was the gas shortage, so it was a special blessing to the members who lived in Rainbow, De Luz, and Camp Pendleton. While some of the members liked this arrangement, others thought they lost the closeness among the members.

Between 1970 and 1978 there were three new wards created. The Vista 2nd, Vista 3rd and the Fallbrook 2nd ward were organized.

President Spencer W. Kimball made a very important and historical announcement on June 9, 1978. This announcement was very controversial and would change the face of the church throughout the world forever. The announcement said that, “All worthy male members would be able to hold the Priesthood”. Everyone in the LDS Church knew that this would mean that African-Americans would be able to hold the Priesthood. Some people were not happy with this decision, but many more were extremely happy and felt it was long overdue.

The Vista Stake of California was organized in October 1978. It was the 967th Stake in the Church of Jesus Christ of Latter-day Saints. The first Stake President was Jack R. Jones and his Counselors were 1st Counselor, Kenneth G. Williams and 2nd Counselor Robert D. McKinley. The High Council was made up of three men, David L. Heid, Eugene Cook and Edward Flake. The Young Women’s President was Gail Pearce and the Relief Society President was Joyce Bitton. The Vista Stake was made up of five wards, Vista 1st, 2nd and 3rd and Fallbrook 1st and 2nd. 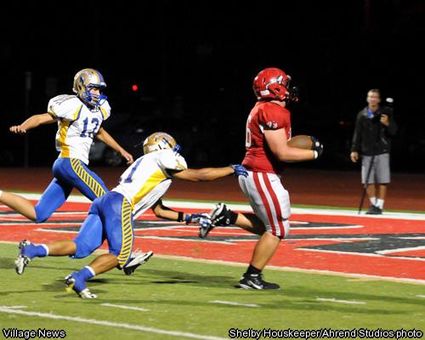 Since the time the Vista California Stake was formed there have been four other Stake Presidents, Robert D. McKinley (December 1986), Dayne G. Gardner (November 1995), Paul M Hatch (November 2004) and Mark H. Ballif (May 2012).

There have been three new Chapels built since the Vista stake was organized. The first was the new Fallbrook Building on Old Stage Coach Lane. The other two were in Vista. The first was on Melrose Dr. and the second on Bobier Dr. The one on Bobier Dr. became our new stake center. At the time it was built it was the largest church building in Vista, at 52,00 square feet.

At the current time there are 4,511 members in the Vista California Stake. Could Velma and Lin Peterson and the thirteen people who met at that first meeting at the Peterson home on Old Stage Coach Road have realized that the church would grow into such a large stake in such a short time!