What makes Nessy Burgers outstanding? It's a secret! 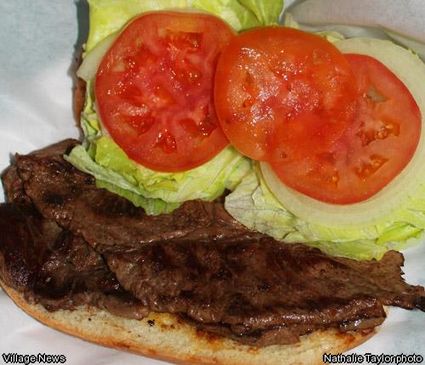 While writing my review on Nessy Burgers I tried to find a different angle. Then, I began thinking about the secret recipes used and thought – that’s it – the angle is “Nessy’s secrets.” Just like the elusive Loch Ness creature, “Nessie” – the burger recipe and sauce recipe used by the establishment remain secrets.

Nessy Burgers are unique. These half pound burgers are hand-formed from a secret blend of premium chuck and sirloin beef. Only the owner, Sandra Webster, and the butchers, know the secret. It is ground fresh each morning, then, some spices are added. Which spices? That’s also a secret. All I know is that they have the right formula, because Nessy Burgers are loved by many!

Secret number three is the sauce that enhances the burgers. This sauce is made from a recipe developed by Sandra. I can tell you what I think it is – a blend of mayonnaise, ketchup and some pickle relish. I am confident that there are other ingredients involved, but I’m not sure what they are. I just know that the sauce is marvelous and a great addition to any of the sandwiches.

The Nessy Burger itself is garnished with a slice of American cheese, fresh tomatoes, onions and hand-separated iceberg lettuce. It is the best (and messiest) if you eat it with the special sauce.

The napkin containers on the table are always full, not because the napkins are unused, but because the Nessy staff makes sure that they are constantly replaced. I guarantee that if you eat your Nessy Burger with the special sauce you will end up with a pile of used napkins!

The Top Sirloin Steak sandwich can be grilled to individual taste preferences, but there is one constant – the meat is high quality. As with the other sandwiches, this is also served with tomatoes, onions and iceberg lettuce.

Although the word “burger” is used in the name, they also offer other menu choices such as hot dogs, nachos, ham and egg sandwiches and chicken breast sandwiches. If you want a jalapeño pepper or a turkey burger they have that too.

Nessy Burgers was established in 1989 by Sandra Webster and a business partner who had emigrated from Scotland. The partner, who had lived in the Scottish Highlands, decided to name the eatery after the famous elusive creature – the Loch Ness Monster, otherwise known as “Nessie.”

About seven years ago Sandra and her husband, Charlie, bought out the Scottish partner, who retired. They now have thirteen employees including the Webster’s son, Charlie, who recently graduated from UCSD.

When SR76 was to be widened, Nessy Burgers was forced to move. They found a new home for the “1966 Navy Trailer” that houses Nessy’s heart – the kitchen. With the help of a tow truck, the trailer was rolled to its new location at Pala Mesa Market’s lot on April 7 of this year.

“The owner of the market graciously invited us down,” Charlie commented.

Sandra and Charlie can be found at Nessy Burger almost every day. The couple enjoys visiting with customers, some of whom they have known since the restaurant opened. Also…Charlie wields a mean broom, and that’s important…when you happen to sell messy Nessy Burgers.

http://www.nessyburgers.com, has more than just menus and history; it has a link to fascinating stories about the legendary Scottish “Nessie.”