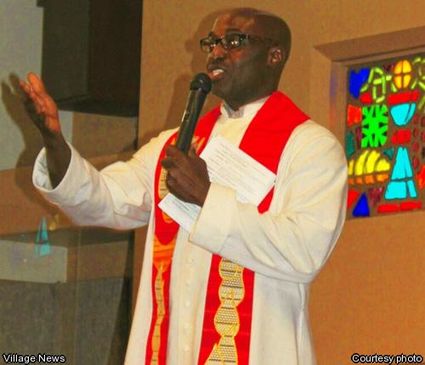 Pastor Kenneth also earned a Master of Divinity degree at Yale Divinity School. In July 2012 he was called to be associate pastor at Christ The King Lutheran Church in Fallbrook where he preaches dynamic and insightful sermons.

But his ministry really began when he was seven years of age growing up in Kingston, Jamaica. That is when a young Kenneth felt the call of God on his life. “I would play ‘church’ with friends – I always wanted to be the pastor,” he reminisced. “I knew somehow that God had called me.”

Born in Jamaica to devout Christian parents (both now deceased), Pastor Kenneth enjoyed the company of his three brothers and one sister. Church, family devotions and prayer were all a part of his upbringing.

In 1970 the family moved to Los Angeles where they attended “Angelus Temple,” a Foursquare Church founded by Aimee Semple McPherson. The Davis family lived in East LA and took the bus out to Echo Park every Sunday for services.

Pastor Kenneth married in 1998. He and his wife had three daughters; but three years ago his wife passed away from breast cancer. “It was one of the most difficult things I have experienced,” he said, “it reshaped how I minister to those who are grieving and experiencing tragedy.”

A wonderful woman named Emily came into Pastor Kenneth’s life and the two were married last July on a Disney Cruise. With his three daughters and Emily’s two daughters they became a blended family of seven.

Pastor Kenneth said he loves being a member of the CTK family. “It is a pleasure to be part of this congregation of loving, caring people who are serious about their faith.”