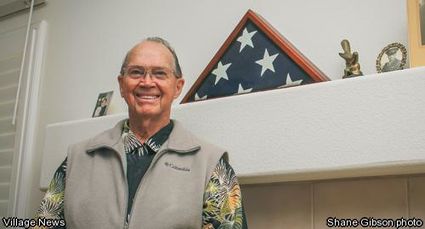 Longtime Fallbrook resident Vern Rowley, 90, stands in front of an American Flag presented to his family in memory of his brother, Lt. Donald T. Rowley, who perished during World War II. Vern served on the Atomic Bomb mission 68 years ago over Hiroshima, Japan.

The mushroom cloud was at 40,000 feet when Fallbrook’s Vern Rowley was able to look back and see the historical, ominous cloud formed by the atomic bomb blast on Hiroshima, Japan, Aug. 6, 1945.

“The top of the mushroom was about five times the width of the stem and probably three football fields wide, when I saw it,” reflected Rowley. “It was a mixture of white and gray smoke, and it was rising fast. The blast occurred seven hours after the mission had departed Tinian Island, part of the Mariana’s chain in the South Pacific.”

Rowley, a Fallbrook resident since 1954, was surprised when a meeting was called about 12:30 a.m. on that day, 17 days before his 23rd birthday.

“That is when we learned why we had been training for over two years in perhaps the most secretive mission in U.S. history,” said Rowley. Titled ‘The Manhattan Project,’ Rowley said his unit had begun training in December of 1944 at Wendover Army Airfield in Utah.

“Our squadron was the 509 Composite Group,” he said. “Our training took us to various locations including Batista Field in San Antonio de los Banos, Cuba.”

Rowley said ironically, Lt. Col. Payette, who was head of security and always reminding the soldiers that “loose lips sink ships,” passed away unexpectedly and his assistant had no idea what the secret mission was.

Fortunately someone else did, and a meeting was called.

“Col. Tibbets told us we were going to find out what ‘the big secret’ was. He said we were going to drop an atomic bomb, which he nicknamed, ‘Little Boy,’ on Hiroshima and it would be devastating. He compared it to exploding five box cars filled with TNT.”

“It actually was more powerful [than that],” said Rowley. “Five aircraft would be involved. I was on board the Jabit III, piloted by Major John Wilson. I was the radar observer and a staff sergeant. The other B29’s included the Enola Gay, piloted by Colonel Tibbets, the Full House, Necessary Evil, and Straight Flush.”

Rowley said his aircraft was to precede the Enola Gay in flight by one and a half hours in order to perform weather reconnaissance over Kokura (the Pittsburgh of Japan and a large munitions plant), considered an alternate target.

“It was a beautiful, sun-filled day over Hiroshima,” said Rowley. “Our meteorologist radioed the Enola Gay that visibility was 1/10 and clear as a bell. We powered down for our return to Tinian Island at 8 a.m. Our course was less than 100 miles from Hiroshina.”

“We all took turns looking out blistered windows at the enormous cloud,” said Rowley. “We had been warned not to look at the initial flash, that it could cause eye damage. However our tail gunner saw the flash, but I never heard that he had any problems <as a result>.”

When the men returned to North Field, they were told they were to leave the following day for the United States “to pick up more weapons and return to Tinian,” said Rowley.

“We departed for Kwajelein Island on our trip to Hawaii and then the U.S.,” he said. “As we prepared to depart from Hawaii two days later, our commander received a message that Japan had surrendered unconditionally and that the war was over. We were now to continue to the United States to prepare for our discharge.”

Less than 10 years after serving in the military, Rowley moved to Fallbrook and began a construction company, V.J. Rowley Construction. 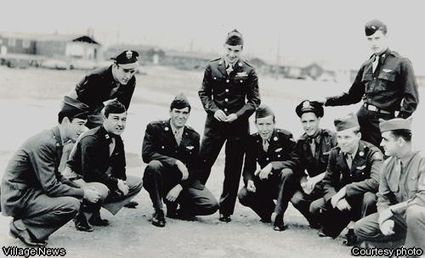 “We built many homes and buildings in the area including the present Zion Lutheran Church,” he said.

Now 90 years old, Rowley sustains an active lifestyle and is a much sought-after speaker across the nation. He is a regular feature at the annual meeting of the 509 Composite Group survivors.

Rowley is one of the founders of the International Business Men’s Fellowship, a Christian men’s organization, now 16 years old, that operates worldwide. He operates a chapter in Fallbrook that meets for breakfast every Saturday morning at 8 a.m. at Denny’s Restaurant. It is open to any man interested in joining.

In reflecting on his life’s experiences, Rowley said, “The bomb drop experience was second to my personal relationship with and knowledge of Jesus Christ.”