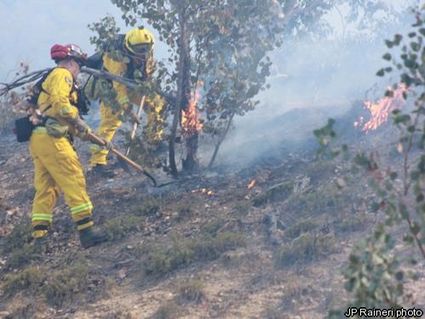 Responding firefighting crews work to put out a fire burning in west Temecula on Wednesday, June 4, 2014.

The Santa Fire in Temecula was reportedly fully contained at 6:15 p.m. The blaze was managed by Riverside County Fire and Cal Fire. The incident was located at Rancho California Road and Via Santa Rosa.

According to Riverside County Fire, due to more accurate mapping, the fire has been downgraded to 14 acres.

"The cause of the fire was determined by Cal Fire investigators to be mechanical failure of a vehicle," they stated.

Authorities said 125 firefighters fought the blaze with the help of two air tankers and two bulldozers.

No structures were reported as damag...