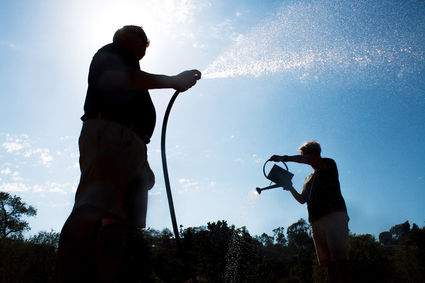 Brad Johnson, left, and Joan McConnell water a putting green at Fallbrook Golf Club after a recent sale of the golf course fell through. Concerned neighbors who want to see the golf course stay have been watering portions of the golf course in an effort to keep it green and presentable to potential buyers. Shane Gibson photo

Fallbrook Golf Club owner Jack Lamberson said Tuesday (Aug. 9) that he was going to meet with a realtor that morning regarding a deal for the 116-acre property located in the Gird Valley.

"We're still trying," said Lamberson of his quest to sell the 18-hole course – a task he has been working on for more than two years. "We have a an interested party."

Teresa Platt, the leader of "Save Fallbrook Golf Course," saw the hopes of her group raised high and then dashed last month when what appeared to be a promising deal fell through. Despite the setback, she is still optimistic.

"We remain hopeful," said Platt, who said Save Fallbrook Golf Course's main focus has always been on trying to find a buyer for the course. "There are buyers circling. The issue is at what point does this asset become financially realistic, and at one point is Jack motivated enough to actually close a deal. That's up to him."

Platt said she sympathizes with Lamberson, who has repeatedly stated that he has being losing money since purchasing the course in June 2012.

"We've always supported this golf course – it just got over-capitalized," said Platt. "Jack's the last man holding the bag. I feel for him. We're all praying for him and hope that it all goes well and that he makes a good deal."

Platt said her main selling point to potential buyers is guaranteed support from the community.

"The thing we have going for us is there is enormous community support," said Platt. "Whoever comes in here, if they keep it as open space, golf course, recreation, wedding venue, bar and restaurant – all the things we love – and if they put conservation easements on it, we will pay them a thousand times over. I am sure of it. Because we will thank them for saving this important property. It's the cornerstone of Gird Valley, the anchor."

Since the golf course hasn't been watered since July 25 – the day before Lamberson, after not seeing any money, ended negotiations with potential buyer Harold Vaubel – some residents have taken it upon themselves to water greens near their homes.

"Some people have been out there with their sprinklers," said Platt. "The greens are fading fast."

Fallbrook Golf Course, closed since July 26, now resembles a ghost town. On Monday (Aug. 8) evening, the only signs of life occurred when a young man rode up on an ATV, picked up some golf balls that had been left on the practice putting green, pulled out a club that was strapped to the back of his vehicle, teed up a ball and took a swing. He then took a long gaze at the dried up surroundings.

"It's sad," said Brian Timmons, who lives less than half-mile from Fallbrook Golf Club and said he'd play the course weekly and hit balls on the driving range "a couple times a week."

"It was one of the attractions we saw when we came here," said Timmons, whose family moved to the area nearly four years ago. "It was a

good course to play. I'd like to see it get back to full swing."

Timmons added that he is tired of hearing the course is "open and then closed," and "sold and then not sold."

"I just want a resolution one way or another," said Timmons. "Either somebody buy it for a golf course, or somebody buy it and develop it. Do something, because it looks like crap right now and is an embarrassment."