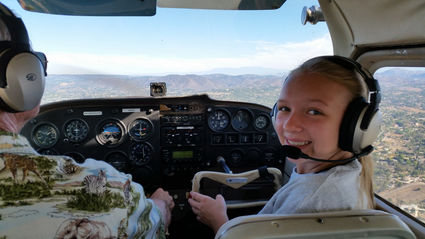 The Young Eagles rally Oct. 8 at Fallbrook Community Airpark allowed 38 children to fly in the front seat of an aircraft.

"The children not only get a flight, but they get a briefing on aviation," said Young Eagles coordinator Peter Griffiths. "They get shown around,"

The EAA implemented the Young Eagles program in 1992 to increase interest in aviation among youth. Children ages 8 to 17 fly for free and are also given an opportunity to pilot the planes. Federal Aviation Administration (FAA) standards classify any aircraft which is self-built or modified as experimental, so the planes have been successfully tested despite the experimental label and they have undergone FAA inspection and certification. The pilots at Young Eagles rallies must be EAA members but do not need to be members of the hosting chapter.

The national EAA organization provides requirements and guidelines to its local chapters. Although there is no EAA chapter based at Fallbrook Community Airpark, FCAP started a Young Eagles program at the Fallbrook airport in 2001. EAA Chapter 1279 is based at French Valley Airport on the outskirts of Temecula, and in 2003 FCAP began its collaboration with EAA Chapter 1279 for the Young Eagles rallies in Fallbrook.

Holding the Young Eagles flights at Fallbrook Community Airpark rather than at French Valley Airport allows parents to watch.

"The runway there is so close to the viewing area," Griffiths said. "If we did it at French Valley, they'd be half a mile away from the runway."

The national EAA guidelines allow multiple children in four-seat planes, but Chapter 1279 only has one child on each flight so that the young aviators can sit in the front seat.

"We only fly one child with each pilot and each aircraft," said Griffiths.

The program on a worldwide basis has flown more than two million children. Chapter 1279 has taken approximately 1,100 children for plane rides.