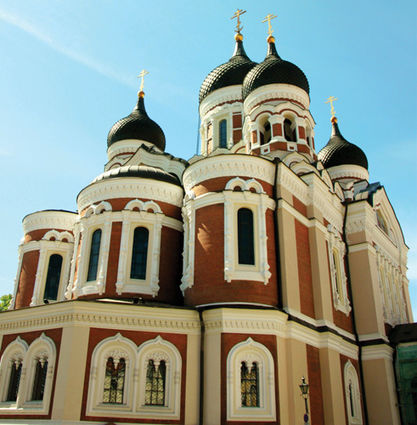 Tallinn, Estonia is a cauldron of scents and sounds and colors. Peeling away the layers is like peeling an onion, all the layers are pungent and demand their own attention. Tallinn is winding cobblestone streets lined by a massive stone city wall. Tallinn is buildings with an abundance of red tile roofs. Tallinn is candlelight and the scent of wax from the many churches. Tallinn is much more…

This medieval harbor town sits on the Gulf of Finland, an arm of the Baltic Sea. I first set foot in Tallinn with my cousin Birgitta. After arriving on Estonian Air from Stockholm, we made our home at the Hotel Telegraaf, located in the Medieval Historic Centre. The hotel is housed in a building that was constructed in 1878, and was formerly a telegraph office. It is the epitome of elegance. I opened the window of our suite and leaned out. The flower-filled courtyard was enclosed by a stone wall which was probably older than the hotel itself.

Each morning we enjoyed breakfast in the luxurious Tchaikovsky restaurant lit by chandeliers made of hand-blown glass. Three tables laden with a dizzying array of Russian and Estonian delicacies greeted us. Fresh-baked white, rye and brown bread, along with pickled herring and Scottish salmon, were favorites. Marzipan petit fours made for a sweet finale. The aromas swirling about the restaurant were pure heaven!

During our time in Tallinn, we discovered various cafés for either lunch, coffee, or dinner. They were all unique, and the food superb. Birgitta led us to the oldest café in Tallinn – Kohvik Maiasmokk – operational since 1864. With cases stocked with enthralling pastries, it was difficult to choose. Marzipan, a traditional sweet since medieval times, is made by hand at this café. Of course we had to sample some of their fresh marzipan, which was layered over pink cake, then drizzled with playful swirls of chocolate. We found an intimate corner table where we lingered over our pastries and enjoyed the fascinating Ferris wheel sculpture fashioned out of spoons.

Another favorite was the Farm Restaurant – which was too elegant for its name. Herbs are grown on site, soups and sandwiches are fresh, and the bread is freshly baked. The chefs whip up their masterpieces in a cylindrical glass room, and it was entertaining to watch them wield the instruments of their craft.

Birgitta was an informed traveling companion, spending more time than me with her eye on the guidebook. With the exception of one horse-drawn carriage ride, our exploration of the Medieval Historic Centre took place on foot. Around every corner and down every street there was another example of historic architecture.

In the shadow of the imposing 14th century city wall, women peddled their wares. Some were fashionably attired, while others wore tatty sweaters. The gray, uneven stones sheltered stall after stall of hand-made woolen scarves, gloves and socks.

Down the narrow alleyway of Katarina Käik past broken pieces of medieval gravestones, the scent of a glass-blowing furnace fire drifted through the air. Ducking through a low doorway we encountered shelves of completed glass pieces. A glassblower was concentrating on a piece that – at the time – was just a yellow/orange glowing object at the end of a long metal pole in the molten hot furnace. People would come and go, but his concentration was not broken.

Shops with Baltic Sea amber pendants and earrings abounded. In shopping for an amber pendant I remembered the advice of my mother-in-law, Emalu, “The amber pieces with the most bugs are best – look for the bugs.” So I did.

Looming over the Raekoja Plats (Town Hall Square) was the Raekoda (Town Hall), a Gothic structure completed in the year 1404. We were delighted to see that a buzzing market fair spilled to all corners of the square. As it was in the Middle Ages, the Raekoja Plats was alive with local artisans and shoppers.

The potent scent of juniper lured us to a stall bursting with hand-carved items made from the soft wood. A juniper serving spatula caught my eye. Small wood pieces of various colors and patterns were pieced together as a veneer for the handle; and the flat spatula was made of thin, smooth wood. It now hangs proudly in my kitchen; and I can still catch a whiff of the juniper scent.

A number of churches can be found in the Medieval Historic Centre, including the 12th century St. Olaf’s Baptist Church (with the tallest spire), and the Püha Vaimu Kirik (Church of the Holy Ghost), a stunning white Lutheran church with a stepped roof and medieval artwork inside. The Lutheran St. Mary's Cathedral (13th century) is also known as Toomkirik (the Dome Church) because of its onion-domed spire. 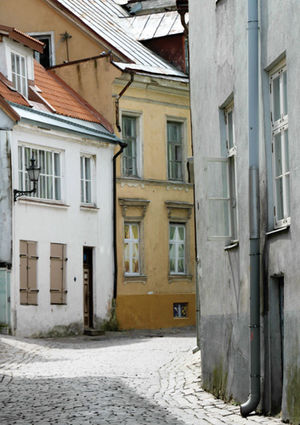 I had read about the Orthodox Alexander Nevsky Cathedral and was as excited as a child at Christmas to finally see it. When I first rounded the corner, and its salmon-hued walls and cross-topped onion domes came into view, I had tears in my eyes, it was so extraordinary. Inside the dim candle-lit sanctuary, there was just enough light to illuminate the gold leaf mosaics. We marveled at the intricate gilt altar, the stained glass windows, and the medieval statues and paintings. Then we craned our necks to appreciate the curved cupolas and the delicate brushwork on the ceiling. Birgitta and I, not forgetting that this is a holy House of God, then lit candles for prayers.

Beyond the formidable 14th century towers of the Viru Gate was a lively flower market stocked with bucket upon bucket of colorful flowers. An elderly woman offered a bouquet of Maikelluke (Lily of the Valley), and its aroma tinged the air. On the wall behind her stood five buckets crowded with the same flowers. A sleek white bird with grey wings sat quietly on the wall keeping watch over the flower buckets. This is the essence of Tallinn – a vibrant, thriving community tempered by a peaceful aura and whiffs of fragrant air.