Stirring the senses in Juneau, Alaska 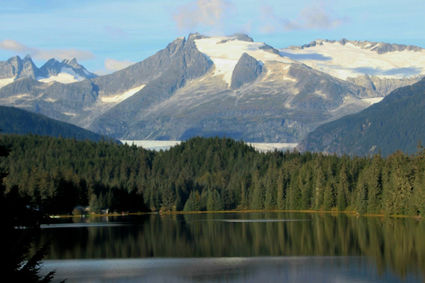 When I watched my 93-year-old mother cradle a slick chunk of 200-year-old glacial ice in her hands – I could not fathom how she could be holding a piece of ice that had her age beat by over 100 years. In Juneau, Alaska I had many similar moments of awe after experiencing the alluring blend of mountains, glaciers, rainforests, lakes, waterfalls and bald eagles, plus a salmon hatchery, and even an onion-domed Russian Orthodox Church.

Juneau, the remote capital of Alaska, is only accessible by boat or plane. For our week-long early September trip, Alaska Airlines whisked us from San Diego to Seattle, then we boarded another jet bound for Juneau. When we stepped off the plane we were greeted by an Alaskan Brown Bear – encased in glass, of course. After securing our rental car, we drove the few miles into town. Driving in Juneau is simple, and since there are no roads in or out – traffic is not an issue.

I am confident that we made the right decision when we decided to visit just one area of Alaska. We enjoyed the tourist destinations, but also tried to delve a little deeper into the history, character and flavor of the area. As we became more familiar with Juneau, we became more enthralled by it.

For me, one of the most pleasurable aspects of traveling is being able to stay in historic hotels and sample regional food. Our “home” in Juneau was an historic bed and breakfast aptly named Alaska’s Capital Inn. Perched on a hill, the 1909 structure is an Arts and Crafts-style home restored by owners Linda and Mark, who were kind hosts.

Our marvelous room was called Lila’s Suite, and was furnished with antiques. From the large bay window we watched the many moods of the Gastineau Channel and Douglas Island. Ever-changing low clouds drifted down the channel, and wispy clouds rose from Douglas Island like ethereal white smoke. We kept the windows open a bit to allow fresh breezes to carry in the scent of the water and nearby trees. During the mornings, we watched a woodpecker work feverishly on a tree trunk, as small yellowish birds flitted nervously from branch to branch.

It was a treat to be lured downstairs each morning by the aroma of bacon, or fresh-baked muffins, or something equally aromatic. Breakfasts prepared by Linda, who cooks like a gourmet chef, were always a culinary surprise – egg soufflé, king salmon omelets, eggs Florentine or dreamy blueberry pancakes.

Fortified by Linda’s king salmon omelets we drove out to Mendenhall Glacier, Auke Lake and Auke Bay. Surreal is how I would describe the view as my eyes scanned Auke Lake, and beyond to the mountains and Juneau Icefield. I felt like I had stepped into a page of a National Geographic magazine.

The Mendenhall Glacier crevices were a magical deep blue, and the ice on the surface had a grayish tint. The glacier "calved" an iceberg about a week before we arrived and it was still floating in the middle of the lake.

The glacier is shrinking due to climate changes. My cousin, Richard Olson, who lived in Juneau during the early sixties, saw my photo of the glacier and was surprised at how much of it had receded in the last 55 years or so. “It is hard to imagine how much it has changed,” he noted. “I learned to ice skate on the lake in front of the glacier. While in the middle of the lake, a crack would go zinging under your feet and you thought the lake would open up...”

Nugget Falls – downstream from the glacier – is a relentless rush of water 377 feet high and 100 feet wide. People were dwarfed by the enormous falls, and from my viewpoint at the Visitor Center window they resembled a swarm of gnats.

Last Chance Basin and Gold Creek are tale-telling names that pique the imagination. On the way out, Basin Road cut a path through lush foliage, affording views of waterfalls cascading down the mountainsides. We crossed two bridges, including the Basin Road Trestle, a narrow, barely one and a half-lane wooden bridge. Basin Road ends at a 1907 Pelton Wheel Air Compressor used in mining. Over a bridge that spans Gold Creek is the Last Chance Mining Museum filled with artifacts.

The Alaska State Museum houses an impressive collection of native Tlingit art and craft pieces, some of which were found buried in glaciers. A parka made of seal skin and decorated with bird beaks at first seemed a bit odd – but the resourceful Tlingit didn’t leave much to waste. Also found in glacial ice were the three impressive mammoth tusks on display.

Our exploration of Douglas Island led to the discovery of a curious tall, narrow house standing alone in Gastineau Channel where it had stood for the last 100 years. The picturesque Treadwell Mine Pump House is such a valued historical structure that it has its own preservation society.

Mt. Robert’s Tramway is the quickest way to the mountaintop where we discovered a trail that snakes through an enchanting rainforest. On the day we arrived it was misting a bit, and moss was dangling from tree branches, smothering rocks and lining the pathway. The rainforest’s earthy scent was otherworldly. 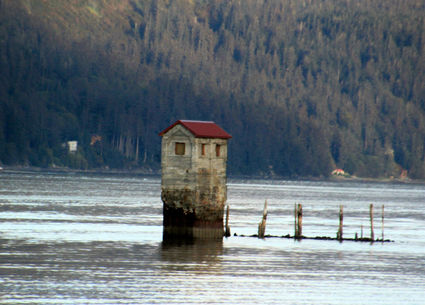 Treadwell Mine Pump House stands in the Gastineau Channel, near Douglas Island.

We enjoyed meals at various restaurants, but my favorite was Tracy's King Crab Shack overlooking the Gastineau Channel. Alaskan king crab is delicious because the cold water fosters a rich flavor. The long crab legs are steamed and served with the shell intact. I split the shell with the crab cracker – then picked out the meat. Yes, there were errant juices splashing about, but Tracy provided a roll of paper towels for that. The crab legs are pricey – and you work to get your lunch – but it is worth it!

Juneau holds many wonders, and there wasn’t time to discover them all. But, like the gold miners, we discovered some, and we know in our hearts that there are more out there – around the next corner, at the top of the next mountain. We will find them – on our next visit.