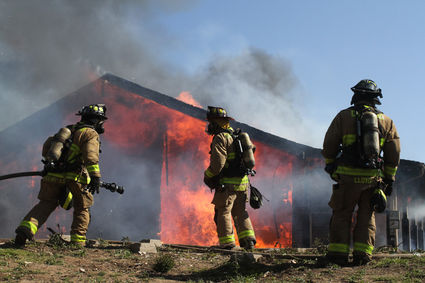 Fallbrook Golf Club, officially closed to golfers last July but dead to most of them long before that due to dismal conditions, went down in a blaze of glory March 31 when firefighters burned the structure to the ground after having used the facility for six days of live fire training.

"You can’t replace this training with anything out there – there’s no simulator, there’s no burn tower that can replace these sorts of structures for the type of training we’re doing," said Kevin Mahr, division chief for North County Fire in charge of the training division. "It was an incredible donation and an incredible service not just to the community here, but to the entire north zone."

The donation of the structure was made by Jade Work, who purchased Fallbrook Golf Club and its neglected 116 acres and old facilities in November. Work is in the process of transforming the property into Monserate Winery, and he invited members of the Gird Valley community to a pig roast March 31 so they could watch the final day of training and "final burn."

"It was a fun excuse to have a party," said Work, who had his crew set up a picnic area on the 18th hole, which provided a safe space and prime viewing location.

While residents were setting up folding chairs or finding a spot on one of the big tree logs that served as "bleacher seating," firefighters continued drills that Mahr said were "invaluable."

"We’ve incorporated multiple different components of firefighting into this," said Mahr of the six days of training. "They've done ventilation – you can see the holes in the roof. They’ve practiced their nozzlemanship. They’ve practiced using electronics such as thermal imagers. They’ve had fire behavior class where they’ll actually watch the fire behavior. They'll change the conditions inside of the structure with the water application. It’s been very educational."

Fallbrook Golf Club hosted a bevy of firefighters during the training.

"By the end of today (March 31), we’ll have rotated through 72 engine companies from throughout northern San Diego County into this structure and given them all the same opportunities," said Mahr. "It’s astonishing."

Work's pig roast attracted a large crowd of Gird Valley residents, many of whom were golfers who regularly played the 18-hole course. Art Smith, who brought his sons Tristen and Tanyon with him to the roast/fire viewing event, said he played the course "three or fours days a week for 30 years."

"I live over on the sixth hole," said Smith. "Every Monday, for 30 years, we would play it with a group of friends. They (Tristen and Tanyon) have been coming here since they were born. We figured we’d come out here and watch it go away."

Smith, who went to school with Work, added that it was "a bittersweet day."

"We had hoped it could still stay a course but this is the next best thing," said Smith. "Jade does first-class work so it’s going to be super nice.”

Bob Lindner, who has lived on the north end of the course since 1971, was also in attendance. Lindner said he has been a supporter of the community group SaveFallbrookGolfCourse.com, which tirelessly worked to keep the property from being turned into a mitigation land bank or sold to a housing developer.

"Naturally we have a vested interest since we live on the course," said Lindner, who was once a member of the Fallbrook men's golf club that played the course every Monday. "I think it’s going to be very nice, especially since it’s not going to be a weed patch like San Luis Rey (the defunct golf course in Bonsall) has turned into. I hope he (Work) makes a success of it, and I hope the community supports him, which I think they will."

Since the Fallbrook Golf Club building wasn't set fully ablaze until after 3 p.m. – notifications of the pig roast stated it would happen at 12:30 p.m. – only a few dozen people from an estimated crowd of more than 300 were still around for the inferno.

While waiting for the final burn down, some people took out their golf clubs and hit some balls on the back nine. Other people who brought their own libations to the event passed the time by sipping on wine or champagne or enjoying a cold beer on a bright, sunny day. 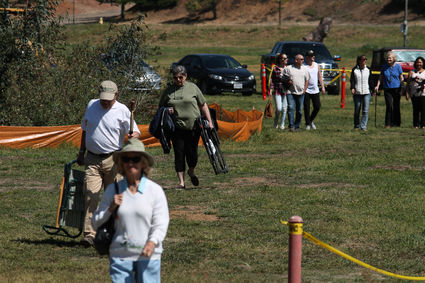 Members of the community around Gird Valley gather at the old Fallbrook Golf Club for a big burn down of the defunt structure conducted by area firefighters, March, 31.

By 3:55 p.m., the structure was basically burned to the ground – only a couple of beams remained ­– and the last spectators started heading home.

Eventually, a new restaurant and wine tasting room will occupy the old Fallbrook Golf Club spot, although there is no set timeline for when building will begin.

"I’m hoping to have all the final plans submitted to the county within the next few months," said Work, who in the meantime will have his crew planting vines on the old "front nine" later this month.