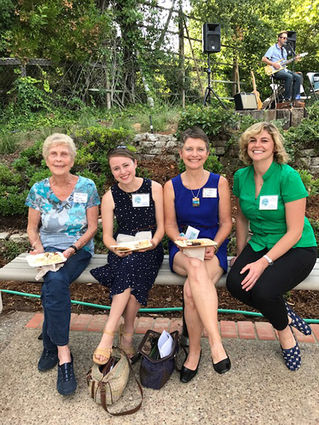 Enjoying a summer evening at the Chamber of Commerce Sundowner at the Palomares House are, from left, Jackie Heyneman, chair of the FLC's Save Our Forest committee; Miranda Kennedy, FLC board member; Diane Kennedy, member of the FLC Native Plant Restoration Team; and Ashley Stein-Araiza, member of the FLC's board of directors.

FALLBROOK – The Fallbrook Land Conservancy has launched a new fundraising program that not only helps support its conservation efforts, but it also benefits local business owners.

It’s called Village Green, “a way for people to support the FLC as they go about their regular errands in town,” said Susan Liebes, vice chairman of the FLC’s board of directors, who unveiled the charitable giving program at a recent Chamber of Commerce “Sundowner,” held at the historic Palomares House and Park in Fallbrook.

When a business owner joins Village Green, Liebes explained, he or she agr...