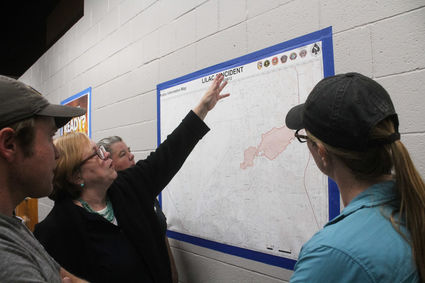 Members of the community go over a map showing the path of the fire on display at the Fallbrook Community Center during a town hall meeting to discuss the Lilac Fire, Dec. 9. Shane Gibson photo.

Cal Fire hosted a Town Hall meeting on the Lilac Fire Saturday night at the Fallbrook Community Center and the standing-room-only crowd received a lot of information, ranging from facts about the fire to what help is available to victims.

Cal Fire Division Chief Nick Schuler was the first to speak, explaining the starting point of the Dec. 7 fire.

“We received a report at about 11:27 a.m. that we had a vegetation fire on Southbound (Interstate) 15, just south of Highway 76 along the roadway there,” said Schuler. “We quickly responded at what we consider a high-dispatch level based upon the weather conditions. Within five minutes myself, a battalion chief and resources from the North County Fire Protection District arrived at scene.

“When we arrived at scene it was approximately two to three acres and the wind had not significantly surfaced until the fire,” continued Schuler. “Within minutes wind gusts were sustained at 35 mph. At that point we began making some significant decisions.”

“After a wind shift, the fire spotted over Hwy 395 right by Rancho Monserate (Country Club),” said Schuler. “Before it spotted over the freeway we placed a mandatory evacuation order not only for Rancho Monserate, but everything on West Lilac Road all the way to the school (Sullivan Middle School), including the school. We did that because we saw how rapidly the fire was growing and we wanted to give people the ability to get out.”

Schuler said due to predicted dangerous weather conditions, namely the forecast for fierce Santa Ana winds, CAL FIRE had already bolstered personnel and resources prior to the fire breaking out.

“We started a staffing pattern, holding people on duty and staffing additional engines and insuring that we had a surge protection of resources should a fire start,” said Schuler. “We had additional aircraft that we moved from Northern California into Southern California based upon predicted and expected weather conditions. It was key that we had that.”

All the extra manpower was needed to fight a fire that traveled quickly.

“Within two hours of the fire it was already 500 acres and rapidly expanding,” said Schuler. “By 6 p.m. the fire was 3,000 acres, and by the evening time it was 4,100 acres. The challenges we faced were extreme weather conditions. There was some incredible firefighting that was done based upon the conditions that they were faced with.”

The fire was fought aggressively from both the ground and air.

“We placed significant resource orders for large numbers of engines and aircraft,” said Schuler. “We placed a no-divert on aircraft due to an immediate life threat. The San Diego Fire Rescue Department has two night-flying capable helicopters and in the early stages of the incident we activated an agreement which allowed us to having night-flying helicopters for the duration of the incident, which was key to our success.”

Military helicopters, two Navy and two Marine, also aided in the firefight, according to Schuler.

Cal Fire’s Tony Brownell, incident management team No. 1, operations section chief, informed the audience that the fire was holding at 4,100 acres and was 50 percent contained. He asked for the patience of people who had still not been allowed to return to their homes, explaining that safety was the No. 1 priority and that crews were working around the clock to put out hot spots.

“You guys made it through the fire, we’re not going to let you get hurt after the fire is over,” said Brownell.

“The forward progression of the fire has stopped, any spread of the fire has stopped,” said Gouvea. “Containment is a little bit different. It’s where we feel very comfortable with a section of line where we can walk away from it and not fear that it’s going to escape and just put it into a patrol status where we have folks driving by and checking on it periodically throughout the shifts. That’s the difference between control lines and containment.”

At the time of the Town Hall, Gouvea said there were “about” 216 engines and 1,409 firefighters on the fire.

“That number is going to start reducing fairly quickly,” said Gouvea, who then drew applause when he added, “Things are looking very good on the fire.”

Gouvea then relayed some interesting information and “a few fun facts” about the scope of the firefight.

“On this fire alone we have help from Alaska, Arizona, Colorado, Idaho, Montana, New Mexico, Nevada, Oregon, Utah and Wyoming,” said Gouvea. “To date, we’ve dumped 92,380 gallons of retardant on the fire and we’ve dumped 230,254 gallons of water. We still have 14 helicopters assigned to the fire.”

“At this point I can report that we lost roughly 180 structures on this fire,” said Gouvea. “Unfortunately, probably 100 of those structures are residential homes.”

Gouvea echoed Brownell’s comments regarding not allowing people back to their homes until it is safe to do so.

“It’s the number one priority to get you back in your homes as quickly as possible,” said Gouvea. “With that, we have to do that safely. We have to know that when you go back home, your kids can go outside without fear of being injured or killed by something that’s left over from the fire.

“With that mindset of trying to get you back into those homes as quickly as we can, you all might not have complete services when you are let back into your homes,” continued Gouvea. “You have to understand the utility companies are working as fast as they can, 24-hours a day.”

Vince Nicoletti, deputy director of San Diego County Planning and Development Services, said the county will open up an assistance center at 9 a.m. Monday at the Vista Library.

“There you’ll have the Red Cross, Salvation Army, DMV, county services, many insurance companies, and nonprofits and volunteer groups that come together after disasters like this,” said Nicoletti. “It will be one location, and we’ll have staff there to route you through the recovery process and answer your questions.

“If you’ve had the unfortunate experience of losing a structure, I want you to know we are here to make it easy for you when you’re ready to move forward with rebuilding,” continued Nicoletti. “You’ll have a personal contact and one name with my department who will help you through the rebuilding process.”

Nicoletti added that people shouldn’t worry about the county causing any unnecessary headaches.

“If you have concerns that there may be structures on your property that weren’t permitted in the past, and you’re concerned about rebuilding them, do not worry, we’ve gone through this before and we want to make it easy for you,” said Nicoletti. “We do not use fires as an excuse or as a point to make your life more uncomfortable. There are state codes and there are requirements that we have to follow, such as the California building code, but where we have flexibility we want to use it. We want to help you move forward as quickly as possible.”

“As with all past wildfires, we’ll be recommending (to the board of supervisors) to waive building permit fees for those that have lost structures during the fire.”

Horn, noting that he was dealing with his 28th major fire in 23 years, reiterated Nicoletti’s statement regarding the waiving of building permit fees. He said he will ask the board Monday morning to declare North County a disaster. Fires have already prompted President Donald Trump to approve the California Emergency Declaration for wildfires throughout the state.

“Some people’s past has probably been burned up because the fire was too fast for them to take very much out of their homes, and their present is a mess and chaos and we want to help them with that,” said Horn. “We want to help you with your future.”

“My office being a state office we are able to help you navigate any state agencies,” said Waldron. “We can deal with the Department of Insurance and insurance complaints. If there is any issues with a vehicle, DMV is a state agency and we can help you with that. Right now is open enrollment with Covered California and we can help with Medical. Any issues that you’re going through we can help you navigate that. We’re here to help. Don’t hesitate to call us.”

Waldron added that members of her staff will be at the assistance center in Vista Monday.

Charlene Zettel of the Red Cross spoke about shelters that were provided for fire victims.

“The Red Cross shelter in Escondido, (at) about 10:30 or 11 p.m. (Thursday), we received 75 evacuees from Fallbrook and Bonsall,” said Zettel, adding that neighbors had brought elderly and disabled residents to the shelter. “With our partners, we sheltered over 880 people in the last two nights.”

Zettel said the shelter at Palomar College in San Marcos remained open Saturday night and that it would have 117 people spending the night there.

“We also want you to know we will be assisting you in recovery,” said Zettle. “Next week we will have people driving through the neighborhoods with clean-up kits and emergency supplies. We’ll have masks, shovels and all those things that will help you clean up debris.”

“A lot of you here tonight suffered a loss, and I’m so sorry for your loss,” said Abbott. “You hear about all the things that went right and it doesn’t feel like a success for you when you’ve lost something and I understand that. Notwithstanding, things could have been much, much worse.

“I too need to thank our men and women of the fire department,” continued Abbott. “All of these folks here have seen a lot of intense fire. This was intense fire. These firefighters ate a lot of fire. That’s not something we like to see happen. I can’t tell you the number of folks I saw just covered in soot head to toe and I’m concerned for their health long-term because of that.”

“The residents of Rancho Monserate – many of them I think are here tonight – I don’t know how on earth you managed to get out of there in 10 minutes without any losses, but that’s a heroic effort,” said Abbott, eliciting a loud and prolonged round of applause.

The Town Hall concluded with a question and answer session that included Rancho Monserate residents asking about the safety of valuable items left in their evacuated homes.

“We have actually been doing active looting patrols since this fire started as areas were cleared up and we were allowed into those areas,” said Cpt. Charles Cinnamo of the San Diego County Sheriff’s Department. “Let me assure you, we have looting patrols out there.” 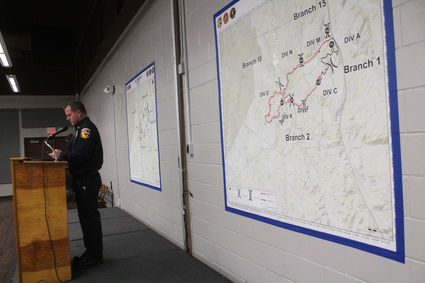 Cal Fire Capt. Jon Heggie, prepares for a town hall meeting to provide information and updates about the Lilac Fire to members of the community at the Fallbrook Community Center. Shane Gibson photo.

Some Rancho Monserate residents didn’t understand why they couldn’t be escorted to their homes for even a five-minute visit to gather medications or clothes or valuables.

Town Hall attendees were invited to meet with officials at the conclusion of the meeting and many people took advantage of the opportunity.