A Phoenix rising from the ashes 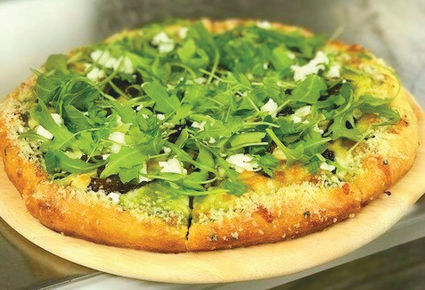 Fresh salmon is the anchor for this luscious entree.

The Phoenix. In both Greek and Egyptian mythology there is a tale of a bird that regenerates from ashes. The original bird was beautiful, and the re-generated bird was also beautiful. This ancient story comes to mind for Faro Trupiano when he ponders the fire destruction and subsequent restoration of his restaurant, 127 West Social House.

The structure was built in 1884 by Elmore Shipley. It was a challenge to renovate the historical building to create a restaurant. Just 15 months after opening – in the cold, early morning hours of April 7, 2016 – an electrical fire destroyed most of the interior on the first floor.

It was an even more difficult task to renovate and restore it the second time, due to the debris removal and the acrid scent of smoke permeating the interior. However, the result of the restoration was a structure where the historical and the modern mingled harmoniously.

During the restoration, Trupiano gave life to the word, "repurposed." Floorboards that survived the fire were too damaged to be used as flooring, but Trupiano had them transformed into stunning tables. A structure beam and the wooden bar also survived. The beam was transformed into a door, and the bar remained. After the pieces were restored, the finished products revealed impressive artistic wood designs.

The restaurant's new interior is inviting, with muted tones, crisp lines, and light from the windows. A cheery fire flickers in the oven and can be seen through a glass barrier. Ernest Hemingway would have felt at home there – he would have called it, "A clean well-lighted place."

In addition to the indoor dining area, guests can also enjoy meals on the flagstone patio where a stream meanders nearby. Strings of white lights are looped from tree to tree, and the fire pit flames flicker. The charming atmosphere reminds me of a bistro I visited in Brussels. Diners have commented that the patio area transports them to other places such as Seattle and San Francisco. Maybe it just transports people to places where they have felt particularly inspired or relaxed.

Trupiano related his re-opening day thoughts, "It was surreal when it re-opened, there were so many emotions...I thought – 'I can't believe it is actually happening. I can't believe that I was able to survive a two-year span of no income from it.'"

On re-opening day, Trupiano observed the bartender, Anthony, standing behind the bar, and two patrons sitting in front of him on stools. This couple had dined frequently, before the fire, and would sit at the exact same place on each visit.

Trupiano was in awe, "I had a surreal moment when I thought, 'Did we ever leave? Did the fire really happen?' Everything was in its place. It was an odd emotion, but a comfort. I thought, 'All the world is right – everything is in its place.'"

The standard of excellence shown in the décor extends to the extensive gourmet menu items. Diners can probably find their favorites on the menu because, as Trupiano noted, "Most of the menu items remain the same – but it is also a blank canvas."

One person who is helping Trupiano with his "blank canvas" is Eric O'Connor, of Fallbrook, the new chef.

"A lot of the dishes are the same, but I have allowed the chef to add his own flair – his own touch," said Trupiano.

The result is a menu full of innovative dishes, including a delicious, newly introduced burger called the "The Phoenix." A brioche bun is the anchor for a beef patty layered with sharp white cheddar cheese, garlic aioli, melted onion (next level of caramelized onion), fresh arugula, and oven-roasted marinated tomatoes.

"I love that it is called "The Phoenix" because that was something I heard over and over after the fire. 'The Phoenix rising from the ashes,'" Trupiano mused.

Next time you are in the mood for a pizza, give 127 West a chance. They offer several selections, and all of their artisan, stone-fired pizzas are thoughtfully and carefully created.

"We are trying to be that restaurant where everybody can find something that they like," he noted. 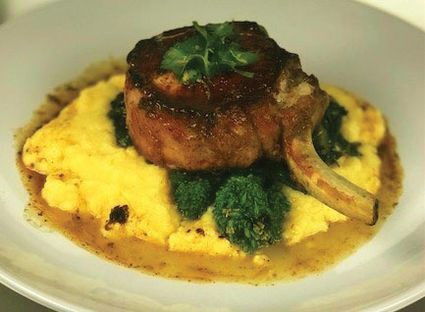 Visit 127 West's Facebook menu page and be awed at the selections. An innovative ingredient is incorporated in each dish. Enticing ingredients such as piquillo citrus aioli, gruyere mornay, rappini, charred asparagus, truffle marcona almonds, and furikaki, may pique your interest. Match the ingredient to the dish next time you visit 127 West, and enjoy!

Faro Trupiano is grateful to the residents of Fallbrook for showing their "amazing" support during the last two years by dining at his other Fallbrook restaurants – Trupiano's Italian Bistro, and Brooktown Kitchen and Coffee.

"Thank you Fallbrook for not giving up – thank you for supporting me and my restaurants," he said. "Trupiano's was the financial source of the re-build. If I had not had the financial support of the people at that restaurant, I would not have been able to rise from the ashes."