Disney's 'Newsies' is a smash hit! 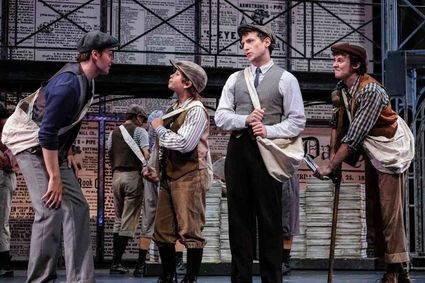 "Newsies" is a smash hit! This huge cast of talented performers delights and inspires! Perfect for the entire family! Great music, explosive, athletic dance routines featuring spectacular tap sequences. Thrilling to watch – exciting to experience. This is rated 10 out of 10.

After coming off the all-time hit, "Mamma Mia," Moonlight Stage Productions is bound to have a back to back success with "Newsies." It is every bit as wonderful as its predecessor and a lot more inspirational.

Of the many offensive conditions perpetrated against the helpless and weak, one such condition would be the unconscionable situations committed against the children of this country before child labor laws were passed.

Based on real life, Disney's "Newsies" is an account of Kid Blink, a teenage newspaper boy who led 7,000 runaways and orphan newsies across Manhattan and its Burroughs to stand up to the industry behemoths like Joseph Pulitzer and Randolph Hearst.

This is truly an inspirational story that helped to change the child labor laws in our country. The ragtag leader and his followers stopped traffic across the Brooklyn Bridge for days, shut down the distribution of news papers and impacted business for two weeks until the newspaper magnates agreed to reasonable distribution practices.

Coincidentally, Moonlight Stage Productions is celebrating the anniversary of that strike with its opening on the same date, July 18, 119 years later.

Set in Lower Manhattan during the summer of 1899, our leader Jack Kelly (Dillon Klena) dreams of a better place. Charismatic and athletic, Klena has a dynamic stage presence that exudes masculinity. His vocals are clear and powerful, his dance movements athletic and commanding, besides an innate sex appeal, he has everything a leading man needs to get the job done.

The story is enhanced by the beautiful Katherine (Katharine McDonough). As a cub reporter she is willing to write the story telling how the newsies are being exploited. McDonough carves out her space with her spectacular voice and presence. A star is born.

The show stopping number "That's Rich" is performed by Medda Larkin (Shirley Johnston), the owner of a dance hall and hide-away for the kids. Ms. Johnston has the pipes and presence of a true Diva and earned her ovation down to the last flick of her dainty wrist.

While this may not be the biggest cast in the history of Moonlight Stage Productions it is clearly an army of talented singers, actors and dancers. One of the youngest plays Les Jacobs (Noah Baird). Baird is just a kid yet already he has his Actor's Equity card. Watch him for a moment and it is easy to see why. He measures up to the older cast members in every way and often pulls focus because of his many charms. He can tap, sing and dance. This kid is a triple threat.

At the other end of the spectrum is Joseph Pulitzer (Hank Stratton). No stranger to musical theatre, Stratton is the guy you love to hate. He is despicably loathsome which offers a new light on the man whose legacy is the Pulitzer Prize.

Outstanding performances were handed in by Scott Arnold as Davey Jacobs, Les's older brother; Austyn Myers as Crutchie who was able to maintain his infirmity throughout his performance; James Odom as Specs is a wonderful carry over from his debut in "Mamma Mia." He brings it all to this show along with local favorite Paul Morgavo as the despicable Snyder. Alphabetically, here is the rest of this amazing cast: Greg Bailey is Wiesel, Jacobi, the Mayor and the Stage Manager, Jake Bradford plays Albert and Bill Hearst, Gavin Calais is Jo Jo and Darcy, Gabriella Certo is a Bowery Beauty, Nun and a newsie. Wes Dameron is Finch, Hanz Enyeart is Elmer and Johnny Fletcher plays Seitz. Sky Nathan Frank is Mush, Tyler Fromson is Romeo and Colby Hamann is Race. Danny Hansen plays Spot Conlon and Tommy Boy, next to Fisher Kaake as Morris Delancey and Mike. Sean Kiralla is Buttons and Shayne Mims is Bunsen. Jacob Narcy is Henry. Greg Nicholas is Nunzio, the policeman and even Teddy Roosevelt. Tristen Ross is Sniper, Tim Stokel is Oscar Delancey and Ike with Erica Marie Weisz as Hannah and a Bowery Beauty.

Size doesn't matter in this cast as proven by the youth ensemble comprised of Nick Aiello, Sean Barnett, Josh Bradford, Hayden Luedde, Piatt Carpenter Pund, Tori Hitchcock, Madison O'Donovan, Claire Scheper, Cassidy Ann Smith and Catalina Jewell Zelles. They vault, tumble, perform back flips and walk overs, splits, tumbles and jumps as well as any of the big guys. Director Larry Raben proved his mettle by pulling off a colossal triumph by guiding this army of talented professionals into a mega-smash-hit.

Craig Noel Award winning choreographer Karl Warden is the high priest of movement. Incorporating every form of dance, he swings from stomp to tap, through rhythmic routs and fisticuffs. Synchronized by this thrilling cast, Warden has pulled off a masterclass in precision. Randi Ellen Rudolph returns as the musical director and conductor. Under her baton the gifted musicians lead the way. Jennifer Edwards' lighting design moved seamlessly between scenes with the help of Brooke Baldwin's crew with Bonnie Durben back on props.

Dressing the cast, Carlotta Malone and Crystal Burden worked wonders along with make-up by Kathleen Kenna and wigs and hair by Peter Herman. These guys know how to pull a show together.

It isn't too late to grab tickets and make plans to see the rest of the season. The "Hunchback of Notre Dame" runs from August 15 to September 1 followed by the blockbuster known as "Chicago" to wrap the season playing September 12 – 29, 2018. 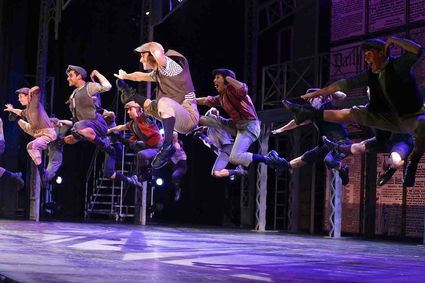 The cast performs one of the many high-flying dance routines in Disney's "Newsies" now playing at the Moonlight Amphitheatre in Vista.

The writer can be contacted at [email protected]