Frankie Avalon – still a crooner after all these years 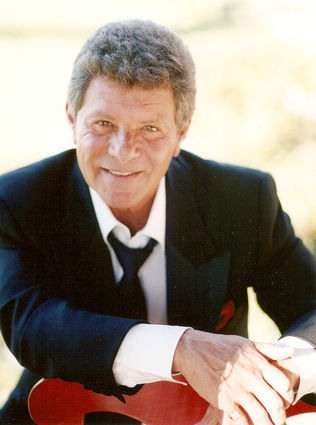 It was 1959, and although I was just 6 years old when Frankie Avalon's song, "Venus," hit the top spot on the Billboard, I remember it well because the song floated into my bedroom from a small transistor radio – repeated and repeated by our local radio station, KFRC San Francisco. In 1959 and beyond, Frankie Avalon's voice mesmerized millions, including me.

Avalon has enjoyed the success that most entertainers dream of – a stellar singing career, movie roles and television appearances. His handsome face, in poster form, graced the bedroom walls of teenage girls all over the country. From 1958 to 1962 Avalon charted 31 U.S. Billboard singles.

With such a frenzy of success, he could easily leave the live performances behind and spend his time lounging on a beach. But, Frankie Avalon has chosen to entertain. He has chosen to bless his fans.

At the San Diego County Fair it was a treat to see this handsome crooner in concert. I joined other Avalon admirers who – like me – were retracing their youthful journeys. The 78-year-old still possesses a rich, honey-like voice – the same voice that shot "Venus" and "Why," to No. 1 spots in 1959.

"Would you like to hear some of the old songs?" Avalon belted out. The crowd responded with resounding cheers and applause. It was clear that they wanted to reflect on the melodic memories of songs past.

Avalon told the audience that "Venus" was a song he "sang all over the world." Then, in an impressive gesture, he left the stage while singing, and circulated through the crowd with one hand holding the microphone, and the other extended as a warm handshake to fortunate members of the audience.

Back onstage, he sang other top-charted, deftly-minted songs, including the melodic and mellow, "Why," and the cheery, "Bobby Sox to Stockings." "Beauty School Dropout," which Avalon sang as The Teen Angel in the film, "Grease," delighted the audience.

Avalon introduced the band's talented drummer who happened to be his oldest son, Frank. Avalon said with a smile, "This kid is 54. It's amazing that we are the same age." He also told the audience that his son "would bang on pots and pans when he was growing up, then he graduated to drums."

A poignant moment came when Avalon mentioned the string of "Beach Party" movies he made with Annette Funicello. The singer then told the audience that he wished he could talk with Annette. (She was stricken with multiple sclerosis and passed away in 2013.) As a nod to Annette, he concluded the concert with the Mickey Mouse Club song.

As he entertained the crowd, Frankie Avalon was upbeat, delightful and energetic. He was a ray of sunshine in the already sunny San Diego air.