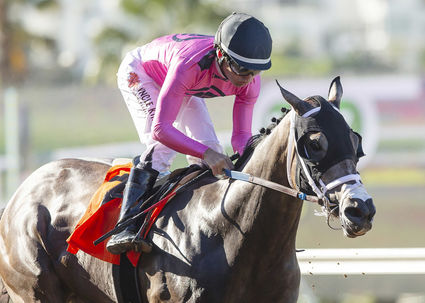 Creative Instinct strides to a convincing victory under jockey Tyler Baze in the $100,000 Generous Portion Stakes at Del Mar Aug. 29.

Trainer Peter Miller, whose operation is based at the San Luis Rey Training Center in Bonsall, repeatedly used the same word in describing his championship campaign at Del Mar's 2018 summer meeting – "unbelievable."

Miller – despite having earned the training title at the 2017 fall meeting – went into the summer racing season with no expectations of finishing as the leading trainer at the 36-day meeting.

"My goals have changed more toward winning bigger, better races and less toward winning the training title," said Miller prior to the summer session.

Well, Miller was able to have his cake and eat it too as he won the training championship with 31 victories and won four stakes races, including the $200,000 San Clemente Stakes.

Miller won the Grade 2 San Clemente with War Heroine during opening weekend and would go on to capture the $151,725 California Dreamin' Stakes with Fly To Mars, the $88,840 Green Flash Handicap with Stormy Liberal, and the $100,000 Generous Portion Stakes with Creative Instinct.

Creative Instinct scored her victory in the Generous Portion Aug. 29 and the 2-year-old filly was one of three winners saddled by Miller during closing week. Ridden by Tyler Baze, Creative Instinct dueled on the lead with Mucho Unusual from the start in the six-furlong race and then pulled away in the final furlong to win by 2 1/4 lengths in 1:12.24.

"She's a big filly – huge – with a long stride on her," said Baze of Creative Instinct, a California-bred daughter of Creative Cause who was purchased in March for $285,000.

"She's going to be so much better when they go two turns (stretch out in distance). Can't wait for that."

Creative Instinct was bet down to 2-5 favoritism in the Generous Portion based on a big maiden win Aug. 1 and paid $2.80 to her army of backers.

"The first-time starter (Mucho Unusual) ran a huge race and gave us a real battle, but I think Creative Instinct's experience and fitness paid off the last eighth of a mile," said Miller, adding that Creative Instinct was a "quality filly."

Miller, who recorded his 31 wins from 114 starters, also had 16 runners finish second and 13 run third. His 27 percent win rate was tops among trainers starting at least 50 runners, as was his 53 percent in-the-money figure. 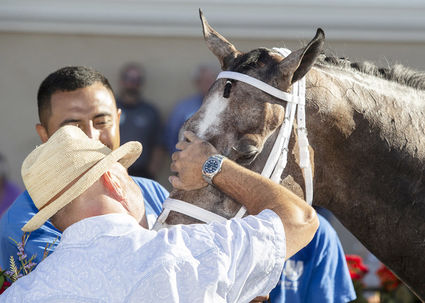 Horses that prepared for Del Mar's summer season at San Luis Rey recorded 58 victories at the seaside oval during the 36 days of racing.