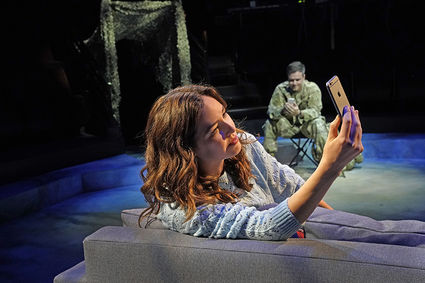 Jessie (Liana Hunt) and Mike (Aaron C. Finley) communicate by cellphone while he is deployed.

Even living behind one of this country's largest military establishments, it is still easy to forget the sacrifices made by the millions of soldiers who preserve our country's safety. For generations sons and daughters of this land have ventured across oceans to protect our freedom and way of life – which as we should all remember is the very finest in the world.

This year while paying tribute to the very persons protecting our shores, country singer and songwriter Clint Black pays tribute to that very thing. God. Country. And family.

"Clint Black's Looking for Christmas" is one man's dream to create a new holiday tradition like "It's a Wonderful Life" and "Miracle on 34th Street." He is very close to fulfilling his vision.

Different from the other two, this new Christmas creation is set in current time encompassing current situations. Exploring the complexities of musical theatre, Black has written four new Christmas songs along with pulling titles from past albums as far back as his 1995 release "Looking for Christmas" and "Spend My Time" from 2004.

This is how the story goes. Army medic Mike Randolf (Aaron C. Finley) has just made it home from Afghanistan in time to attend his daughter's Christmas pageant.

Finley portrays the every-service-man with the same dignity Jimmy Stewart portrayed when representing his every-man character in "It's a Wonderful Life." While these are big shoes to fill, comparable to Stewart, Finley wears his emotions like a coat for all of us to see. He is brilliant.

As does his best friend Douglas Miller (Deleon Dallas). They forge a bond of friendship that radiates from the stage. It plays true at every step. Recently graduated from UC San Diego with his MFA in theater, Dallas has the chops to become a household name based on this performance.

Like the two co-male leads, the two co-leading ladies in this production Liana Hunt as Jessie (Mike's wife) and Syndee Winters as Alissa (Douglas's wife) are equally captivating.

The four make up an outstanding collection of talent. While most of the songs are from Black's 1995 album "Looking for Christmas," four new songs were written for this show. Black's voice can be heard in every line of every song – a total of 16 songs plus these four which are new and never heard before.

Two of the new ones are sung by Syndee Winters (Alissa Miller) "Me and the Moon" and "Never Knew Love." She sings them so perfectly it is hard to imagine they are not available for purchase. Winter's clean, clear vocals are pure and go straight to the heart especially when doing the reprise with husband, Douglas (Deleon Dallas).

The other two new songs are "Magical Christmas" sung with heart by Jessie (Liana Hunt). And in a cute bit of soft shoe, "Hustle and Bustle" is sung by Mike (Aaron C. Finley) and his daughter Ellie (Kaylin Hedges). While only 11, Hedges has performed extensively and will even be in a new Comedy Central show "The Other Two" premiering in 2019.

Outstanding performances in the ensemble include Reanne Acasio, who is first seen in her most memorable character as a soldier. Along with Scott Richard Foster making his Old Globe debut as Jack Peters and Bryant Martin is a very believable Santa.

Rounding out the ensemble players in their Old Globe debuts are Jonathan Sangster, Katie Sapper and Lauren Ellen Thompson.

It wouldn't be a Christmas pageant without a handful of kids and they are delightful. Bobby Chiu, Veda Cienfuegos, Giovanni Cozic, Reese McCulloch and Lauren Livia Muehl. They range in age from 9 – 11. They are wonderful.

And like all true Christmas tales there must be a recurring promise for the future like the tinkling of a bell signifying the creation of a new angel ("It's a Wonderful Life") or Santa's cane left near the fireplace ("Miracle on 34th Street). Watch for the recurring sign of hope. It, too, is endearing.

The production staff exhibit their experience as director Kent Nicholson brings out the best in his cast. Wendy Seyb keeps them moving while Sean Fanning designed the scenery with Rui Rita on lighting. The clear sound was managed by Leon Rothenberg which supported the musical compositions conducted by associate Music Director Cody Owen Stine. Charlotte Devaux dressed the characters to a tee.

The Old Globe has an impressive history of debuting shows on its stage which end up on Broadway. Along with the La Jolla Playhouse, this market is ripe for developing works. And like some who have gone before this one...there are many good reasons to open out of town. Overall the show is 85 percent spot on. That said, I found the set too small and the children's parts too big.

This beautiful new Christmas story will play at The Old Globe until Dec. 31 in the Sheryl and Harvey White Theatre in-the-round in the Conrad Prebys Theatre Center in the heart of Balboa Park. It is 90 minutes about Christmas blessings. Bring a hanky. 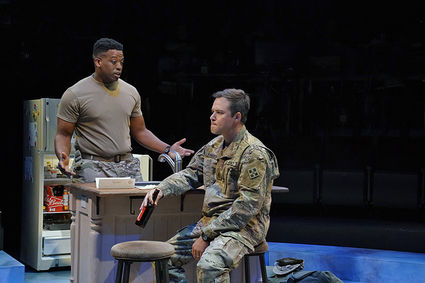 Doug (Deleon Dallas) and Mike (Aaron C. Finley) have a conversation after returning home for Christmas.

Playing next door on the big stage thru Dec. 29 is "Dr. Seuss's How the Grinch Stole Christmas." For tickets, call the Box Office, (619) 234-5623, or visit TheOldGlobe.org. Free parking is still an issue if attending an evening performance. One idea is to come around 5 p.m. to get a spot in the small lot near the complex and then get a bite to eat at either of the nearby restaurants. Or get prepaid parking for $14 when you purchase your tickets. For matinees you can park off Park Street and ride the tram for free until 6 p.m. daily. This show is rated 8.5 out of 10.

ATTENTION: This is the last chance to enter the free drawing for two tickets to see "Mamma Mia" at The Welk Resort in Escondido. The seats are for Sunday, Dec. 16, at the 1 p.m. performance.

My 5-year-old grandson will do a blind drawing Saturday morning, Dec. 1. Winners will be notified back to their personal email and it will be posted in the Entertainment section Dec. 6. In order to enter, just write to [email protected] Or just write anytime to give me your thoughts.