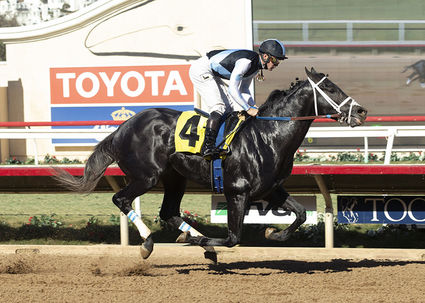 Jockey Flavien Prat eases up Gray Magician nearing the finish of the second race at Del Mar, Nov. 24. The 2-year-old colt scored a 9 1/2-length victory in a one-mile maiden allowance race and was the first of four winners saddled by Bonsall-based trainer Peter Miller that afternoon.

Bonsall-based Peter Miller saddled four winners at Del Mar Nov. 24 and the big day was a key factor in him owning a 12-8 lead over Jerry Hollendorfer in the trainer standings after 12 days of competition at the seaside racetrack's 16-day Fall Festival of Racing, which concludes Dec. 2.

Miller won three races in a row – the second, third and fourth – and then completed his four-bagger with a victory in the ninth and final event.

Miller scored with his first starter of the day when the 2-year-old colt Gray Magician rolled to a 9 1/2-length victory in the second race, a one-mile maiden a...