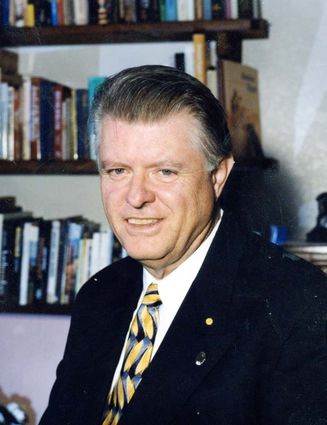 John O. Robertson, Jr. was born December 10, 1939 in Los Angeles, Calif. to John and Roberta Robertson. He attended Faith Lutheran Elementary School and continued at the newly opened Los Angeles Lutheran High School and was among those in the earliest graduating classes.

John had a passion for reading and learning. He attended Los Angeles City College and then attended the University of Southern California where he earned his bachelor of science and masters degrees and later his Ph.D. in engineering. He also took many classes in business administration and geology. He was a staunch supporter of USC and an avid Trojan football fan.

John was actively involved in religious groups while attending college. At City College he served as the president of the Inter-faith group on campus and while at USC was very active in the campus ministry at the Lutheran Church at USC.

Upon graduating from USC he worked for Standard Oil, American Pacific International and then formed his own company, Earth Engineering Incorporated. For many years he had contracts with County Assessor's offices to appraise the value of oil properties (Los Angeles, San Luis Obispo and Merced counties). He also served as an expert witness in court cases involving environmental issues.

He also enjoyed politics and served as a planning commissioner for the City of Cudahy and was later elected to the city council and served in that capacity for 21 years. John was also active in the Los Angeles Country Republican Central Committee and served one term as vice-chairman.

His life long friendship with his mentor at USC, Dr. George Chilingar, was very special. Through the years they co-authored numerous scientific books and presented papers at International meetings. The latest book, "The Evolution of Earth's Climate" was published earlier this year.

John and the family moved to Fallbrook in 2003 and he immediately joined the Fallbrook Garden Club and was a regular member until his illness. He especially enjoyed growing banksia, protea, fuchsias and begonias. He always entered plants in the garden show and was pleased one year to win the prize for having the most first place winners in the show.

Family was very important to John. He married the love of his life, Karen, and they celebrated their 50th anniversary this year. John is survived by his wife, Karen, and children – Gene (wife DeAnna), Gina, Jerry and Anita. Grandchildren include Marcello, Abigayle, Micah and Cameron.

After a lengthy illness following heart surgery John passed away on December 5, just days before his 79th birthday.

A Memorial Service will be held at Zion Lutheran Church, 1405 E. Fallbrook Street, Fallbrook, CA on Friday, December 14 at 11 a.m. with a light lunch immediately following in the Fellowship Center.

In lieu of flowers, memorial donations can be made to Zion Christian School at 1405 E. Fallbrook Street, Fallbrook, CA 92028.