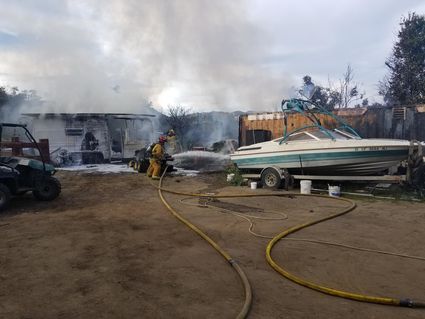 Firefighters work a trailer and nearby storage container that caught fire on Tuesday, Jan. 29.

Firefighters were busy on Tuesday, Jan. 29 with a structure fire in Fallbrook and a trailer on fire in De Luz. Both incidents were contained quickly.

The first fire involved a structure in the 4000 block of La Canada Road, first reported at 7:41 a.m. Firefighters said the fire was contained by 9:30 a.m. and firefighters would remain on scene for salvage and overhaul.

The second fire involved a trailer on fire in the Sandia Creek Drive and Sandia Creek Terrace area of De Luz that was first reported at 8:45 a.m. A family of four was displaced and found accommodations on their own.

Crews from the North County Fire, Pala, Camp Pendleton, and Vista Fire Departments worked the fire that started at the trailer and extended to a nearby shipping container.

The cause of the fire was under investigation.