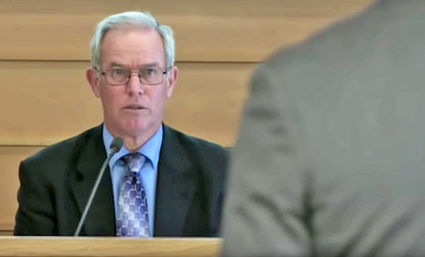 Retired San Bernardino County criminalist Donald Jones testifies about DNA evidence he analyzed during his time working on the investigation into the deaths of a Fallbrook family in 2010.

Federal Bureau of Investigation Special Agent Kevin Boles testified Thursday, Feb. 21, that the cellphone belonging to Charles "Chase" Ray Merritt connected to a cellphone tower several times in the near vicinity to the high desert location that prosecutors said the bodies of a Fallbrook family of four were buried in shallow graves.

Boles' testimony focused on the movement of Merritt's and Joseph McStay's cell phones around the time of the family's disappearance.

Boles showed the alleged path that Merritt's phone took Feb. 4, first connecting with a cell tower at 9:36 a.m. and connecting with three different towers through 9:44 a.m., allegedly heading north on Interstate 15. From 5:48 p.m. to 9:32 p.m. that same day, Boles testified that phone calls to Merritt's phone appeared to be sent directly to voicemail.

According to the phone records, Merritt's phone connects again for the first time in the Upland area, then later in the Los Angeles area, finally back to the Rancho Cucamonga area and again there is no call activity from 3:54 p.m. to 9:17 p.m. when the phone pings near Limonite Road near I-15.

After court was dismissed for the weekend, testimony resumed Monday, Feb. 25, with only an hour of testimony recapping his earlier report.

The defense's cross-examination of Boles was scheduled to resume after press deadline.

Merritt, 61, is accused of killing the McStay family, who lived in the Lake Rancho Viejo housing development east of Interstate 15 in Fallbrook and was last seen alive Feb. 4, 2010. Relatives reported them missing a few days later.

The San Diego County Sheriff's Department and FBI handled the investigation into the family's disappearance in the early years with no resolution.

In November 2013, the skeletal remains of the four family members were discovered in shallow graves by a motorcyclist in the Mojave desert. Records show that all four were beaten to death, most likely with a sledgehammer. At that point, the investigation was taken over by the San Bernardino County Sheriff's Department.

Prosecutors maintain that greed was the basis for Merritt committing the murders and have stated they will be seeking the death penalty in the case.

Retired San Bernardino County criminalist Donald Jones testified Tuesday, Feb. 19 and 20, about DNA evidence he analyzed during his time working on the investigation.

Jones testified about items found at the gravesite where the family was found, including Summer McStay's underwear, which was not tested for semen because of the amount of time that had passed, a swab taken from under Joseph McStay's fingernail and Jones reported that no DNA was recovered.

According to Jones, bloodstain swabs from the sledgehammer found in the grave site showed low levels of DNA that were not interpretable.

"So it would be fair to say on A-19b that no blood was recovered?" the prosecution asked.

Merritt was also included as a possible source in DNA testing results on the SUV's steering wheel.

On cross-examination, the defense asked Jones if he thought because of the low levels reported in DNA markers whether trace levels really means inconclusive.

"Sir, if I felt the trace was inconclusive, I would not have reported it," Jones said.

The defense also suggested that Jones was given information before the testings that investigators were trying to link Merritt to the samples.

"Absolutely not," Jones said. "If you take a look at the front of all three (documents), it says suspect unknown. I didn't know who the suspect was; I didn't even know there was one. All I knew is that I had reference samples that were submitted that I was to compare to these particular profiles."

Union Bank fraud investigator April Coronado also testified Feb. 20 with the majority of her testimony centering around two checks made out to Charles Merritt Feb. 4, 2010, the day the family went missing.

She noted several discrepancies and variations in the way checks entered into evidence were issued. 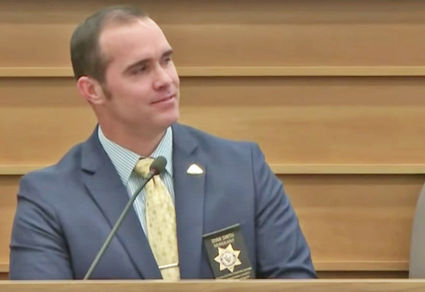 Forensic accountant Scott Weitzman was called by the state to testify about his findings during his reviewing of Merritt's bank records.

The prosecution displayed a graphic showing the combined totals of Merritt's bank accounts spiking to the highest totals in more than a year during the month of February 2010. Weitzman returned Thursday, Feb. 21, to testify under cross-examination.

San Bernardino County Sheriff's Department Sgt. Ryan Smith was recalled to the stand to testify about Merritt's phone records in relation to visits by the defendant to area casinos Thursday, Feb. 21.