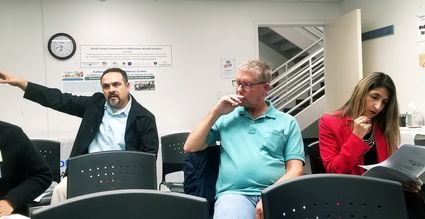 While there wasn't a huge turn out at the Fallbrook Regional Health District's public forum Wednesday, March 6, the board's directors gained input from those who did show up.

The forum was held for the public to bring their own maps and opinions on how the health district should go about dividing its election system into five new zones.

Fallbrook Regional Health District is voluntarily moving away from an at-large election system for the 2020 election to avoid potential litigation based on the California Voting Rights Act and to ensure the board's makeup better represents its diverse communities.

Signed into law in 2002, the voting rights act prohibits the use of any election system "that impairs the ability of a protected class to elect candidates of its choice or its ability to influence the outcome of an election."

Jurisdictions can be sued if they elect their governing body using an at-large, from-districts or mixed election system.

Latinos make up the highest protected class group in the Fallbrook area.

Latinos are particularly concentrated in the core of Fallbrook, with other clusters in Rainbow, Bonsall, along I-15 and in the northwest.

"Our goal is to divide the district into five equal districts," Shalice Tilton, a senior consultant with the National Demographics Corporation who was hired to facilitate the mapping process according to California law at Wednesday's public forum, said. "Not equal in size, but in total population."

Tilton's job was to take notes from residents on what they saw as communities of interest, which are defined as neighborhoods or communities that share interests, views, problems or characteristics.

"We are trying to not split up neighborhoods, as to not dilute their voting strength," Tilton said.

In 2021, the process will have to be redone using new data from the 2020 decennial census.

On a large projector screen, a color-coded map detailed the perimeters of the Fallbrook Regional Health District, which borders Riverside County to the north, Camp Pendleton to the west, Vista and Oceanside to the south and just east of the I-15.

A few members of Fallbrook's Human Rights Committee attended the public forum and brought with them maps they helped compose for Fallbrook's recent high school and elementary school redistricting.

"I'm encouraged by the process here," Favela said. "I see genuine interest to approach this as thoughtfully and as respectfully as possible. It's a very important issue and it deserves our best efforts."

Tom Frew, a Fallbrook resident and Human Rights Committee member, said it was gratifying to share their maps with the board, as the group had spent lots of time and effort in making them.

They also drew advice from the Mexican-American Legal Defense Foundation.

"That's all we really wanted, was to have it fair and understandable," Frew said.

The difference between the school districts maps and the ones to be drawn for the health and fire districts are the latter don't include Camp Pendleton and parts of Bonsall, Frew said.

One zone Frew and Favela helped to identify for the board is what they call the "downtown district."

It runs from Alturas Road to Old Stage Road to East Mission and down to O'hearn Road but doesn't include Poet's Square.

Favela explained further that their map of the downtown district shows a solid population district of about 12,000 people with maximum voting potential and a strong multigenerational Latino presence.

"This could be a good starting point," Favela said. 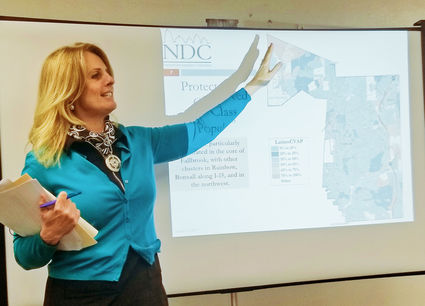 Shalice Tilton, a senior consultant with the National Demographics Corporation, helps facilitate the mapping process according to California law at Wednesday's public forum.

Before a final map is drawn up, the health district's board of directors will meet again to discuss options for the actual drawing of the map, which may include a $4,000 toolkit to assist with the process.

Board director Kate Schwartz-Frates said, "I think we are making a great start in engaging the community to participate and provide input and suggestions in order to voice their concerns and priorities for the redistricting process."

The board plans to hold one or two additional public meetings as needed.

"The advantage is, we have plenty of time and no strict deadlines," Kate Schwartz-Frates said.

The board's interim director Wendy Lyon said, "I'm pleased with the interaction and the collaboration of the community. We really want to inform, educate and empower the community to be part of the process."

Linda Bannerman, office manager and board secretary, said she was happy with who showed up. "They brought their own maps with them. They've done their research, and that's what we need," Bannerman said.