The history of pizza moves from poverty to prosperity 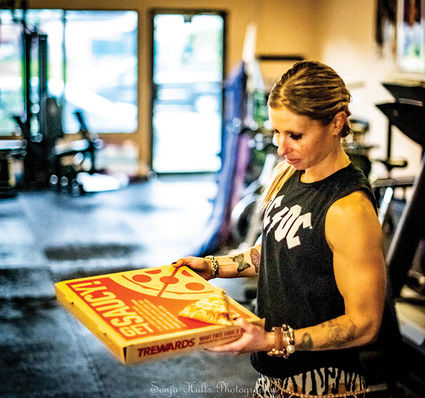 Portion control with pizza is the key. Sonja Hults photo

A slice of pizza is the popular pick to satisfy so many people's taste buds. Well, let's face it most times it is more than one slice. Where did this dish come from? How has it made its way into everyone's homes, parties and events? Pizza started its legacy in Naples.

Naples, back in 1700s and 1800s, was a popular waterfront city in Italy; however, it was known for its high population of the working poor, called lazzaroni. The wealthy were a minority at that time, so the Neapolitans needed a food supply that was inexpensive and quick to eat.

For this purpose, flatbread with various toppings came to be what everyone reach for... later to be called pizza. It was eaten at any meal and sold all around by the local street vendors. Pizza was the food of the poor and frowned upon by the prestige who couldn't believe such garnishes like cheese, tomatoes and garlic, could be considered a meal.

In 1861, King Umberto I and Queen Margherita visited Naples. The queen become bored with her traditional meals, so she ventured to try this pizza she had heard of. Her favorite choice was pizza mozzarella, which had the colors of the Italian flag.

The first documented United States pizza was from Gennaro Lombardi's on Spring Street in Manhattan. This joint received its license to sell in 1905 and still exists today. There are of course East Coast debates on who has the best slice. As more Italian-Americans migrated to the U.S., the pizza movement continued to spread from east to west. Pizza almost became American.

Soon chains formed like Dominos and Pizza Hut. Pizza can now be found in 60 different countries. Its revenue is near $32 billion reaching up to 252 million pounds consumed in the U.S. Can you believe that nearly 93 percent of Americans eat pizza at least once per month? That equates to 360 slices each second, or 90 to 100 acres per day.

Saturday night is the popular day of choice. Anchovies are the least popular topping, with pepperoni coming in as the favorite. People see advertisements for pizza on TV, magazines, newspaper, radio and everywhere. The country has close to 62,000 pizza parlors. The average American eats about 46 slices per year.

Portion control with pizza is the key. Type and size are also considerations. Everyone has their preference and tries to keep their consumption at bay, but their taste buds tend to take over all inhibitions. Hey, sometimes pizza even starts the day as breakfast.