FUHSD votes to adopt map 5A for zone election boundaries 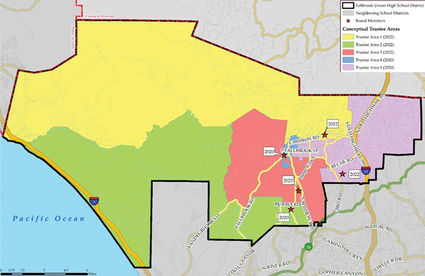 The graphic shows the breakup up of the district boundaries of Map 5A.

At the Monday, March 11, meeting of the Fallbrook Union High School District, board map 5A was adopted as the new voting boundaries for the district.

The map was selected by the board from a pool of seven proposed conceptual maps in a process that began back Nov. 5, 2018, when the board initiated the process of transitioning to by-district elections as dictated by the California Voting Rights Act.

Before the vote, board members were currently elected in at-large elections, where each member is elected by voters throughout the district, but the California Voting Rights Act prohibits the use of at-large elections. The new by-trustee-area elections approved by the board means voters will elect trustees in geographical subdivisions of the jurisdiction and are immune from challenge.

The board hosted public hearings on trustee area scenarios starting in January and February before coming to a final vote, March 11.

Unlike the Fallbrook Union Elementary School District's Map 103 adoption back in February this year, supporters and members of the Latino community approved the FUHSD's adoption of map 5A.

"We are appreciative of the FUHSD board's vote to adopt the map proposed by the community," resident Tom Frew said. "FUHSD and their demographer worked closely with the public to learn our concerns and incorporate the comments we had. The process worked smoothly."

Leticia Maldonado-Stamos said she also appreciated the board and administration for working with the community throughout the process. 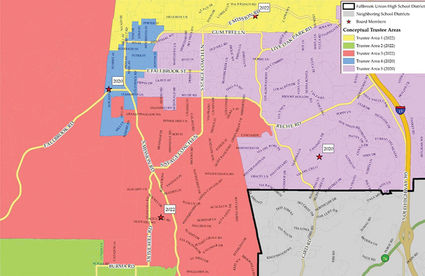 The graphic shows the breakup up of the district boundaries of Map 5A and the election year that each zone will come up for election.

"When we were down to the last phase and the community and board were presented with two additional maps or scenarios – 4A and 5 – and we wanted just a little more tweaking, they did so and came up with 5A," she said. "The high school board's apparent No. 1 concern was to do what the community was asking for – and that was to remedy the CVRA violation as soon as possible without any personal biases. This is a great start for a new majority board and existing board members working with the community.

"It gives us hope of reaching new academic heights with our high school, for the benefit of our high school students, who depend on the instruction they receive here in Fallbrook for a meaningful and successful education that will be their foundation for a bright future," Maldonado-Stamos said.

The board also approved a request a waiver from the state Board of Education regarding the district being required to pay for a special election to accommodate the installation of the new trustee boundary map.