Two cars collide at intersection of South Mission and Alvarado 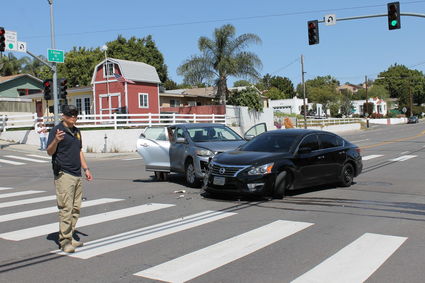 A car crash that occurred just before 11 a.m., Wednesday, April 10, on the corner of South Mission Road and Alvarado Street sent a pregnant woman to the hospital and left another woman with minor injuries.

The intersection was blocked for traffic until the cars could be removed.

The driver of the silver Mazda said her airbag deployed and she suffered a burn and minor injuries to her arm.

"She turned right in front of me. I barely had times to hit my brakes," the driver of the silver Mazda said. The 46-year-old Fallbrook woman said she was wearing a seat belt, and declined first responders' offer to go to the hospital. The woman also had a dog riding in a car seat, which did not appear to suffer any injuries.

The driver of the black sedan is 7-weeks pregnant, according to Lizette Rodriguez, a first responder citizen on the scene.

Rodriguez said she had just left Walgreens when she was driving along South Mission Road and saw the accident. She stopped and got out to see where she could be of help.

"I stood here with her (the pregnant woman) while the ambulance and firemen came," she said.

Family members, who arrived on the scene, said the driver of the black sedan is 22-years-old. She apparently suffered injuries to her chest where the airbag hit her when it deployed.

Rodriguez said border patrol agents were first on the scene, followed by an ambulance, the fire department and police. The pregnant driver was helped out of her car, which was leaking oil. She was then taken care of by ambulance personnel before being placed in the ambulance and taken to the hospital. The scene was cleared in about 15 minutes or less, and traffic returned to normal.