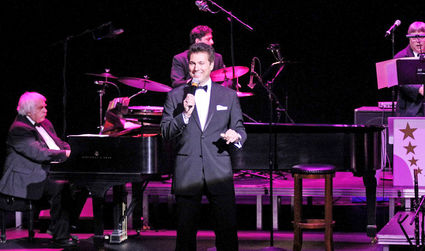 Troy Clarke will take center stage with the Big Band All Stars backing him up at the Great American Songbook 2019 show set for Sunday, April 28, at the Old Town Temecula Community Theater

It has been almost seven years since the Big Band All Stars and Troy Clarke presented the Great American Songbook show for fans of music written in the first half of the 20th century, the Tin Pan Alley days and popular Broadway musical hits.

For producer Jeff Stover, bringing the show back to the Old Town Temecula Community Theater Sunday, April 28, is important for several reasons.

"People should come to hear Big Band music which is a rare and unseen musical form that has faded away in most places but is alive and well in Temecula," Stover said. "They should come to see their favorite Temecula theater musicians that they have become fans of over the last 14 years and to hear our break out Red Hot Dixie Band and the big band play some exciting instrumental numbers."

Stover said he has led the Big Band All Stars for 10 years and that the band features some of the best musicians from the Inland Empire and Southern California area.

"Many of the players have been with me from the start and some are new to the band over the last two years," he said. "Most of the musicians are good friends that I have and are the best players I know and great people to be with.

"The band was started by my dad, Richard Stover, more than 20 years ago and played at the Temecula theater ever since the first opening days. After my father passed in May of 2009, I became the band leader. Our longtime fans have supported us ever since," Stover said

"The band has 10 other players with equally impressive resumes," Stover said.

Standing out front and putting words to the music will be singer Troy Clarke, who performed the show once before at the 2010 performance at the theater.

"He sings all the greatest songs from the past from Broadway to popular to standards that became part of the Great American Songbook," Stover said. "He has a genuine rapport with the audience that makes them feel comfortable and relaxed. His good looks and sense of style always attracts the ladies."

Stover said the set list will feature many styles of music – from "fast energy swing to soft ballads and a few bossa feels."

"Each song is a big hit during its time period," he said. "These songs were made famous by Frank Sinatra, Mel Torme, Harry Conick Jr., Sammy Davis Jr., Jack Jones, Tom Jones, Dean Martin, Johnny Mathis and all the great singers of the big band era."

Stover said he can't pick a favorite from the set list, but he has some preferences.

"I really enjoy the entire two hours of music so it is hard to pick one moment as there are so many," he said. "The songs before the intermission and near the end are my favorites as they have the energy to close each act and are my favorite, best charts and arrangements."

Stover said he hopes people will come out to support the music that is historically significant and specific to the United States.

He also said it's important to support the art form at the local theater.

"People should also come to support the arts in Temecula and make sure that this music lives on in this unique town and venue," Stover said.

The Great American Songbook 2019 will be performed at 2 p.m. Sunday, April 28, at the Old Town Temecula Community Theater, 42051 Main Street in Temecula.

Tickets are $37 general admission, $35 for seniors and military, $25 for students, and $31 for groups of 15 or more people. Tickets can be purchased at http://www.tickets.temeculatheater.org or by visiting the theater's box office.

Jeff Pack can be contacted at [email protected]