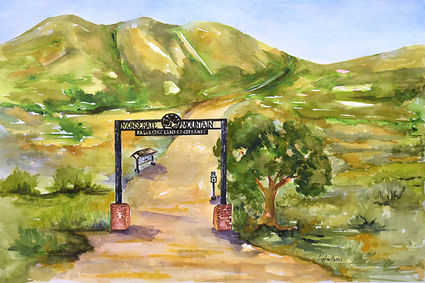 Lydia Rossi, a local artist and longtime board member, has created a watercolor rendering of the envisioned new trailhead at Monserate Mountain Preserve. A booth at the location will offer brochures, maps, Fallbrook Land Conservancy T-shirts and hats for sale, May 18, to kick off the fundraising campaign.

FALLBROOK – The "I love Monserate Mountain" Trail Improvement Challenge, a new campaign to raise funds for regrading parts of the trail and other enhancements at Monserate Mountain Preserve, kicks off Saturday, May 18, at the preserve's trailhead.

Activities begin with an 8:30 a.m. guided morning hike to the summit, followed by an "Open House" at the trailhead where hikers are invited to learn about the new campaign. A booth staffed by volunteers will also provide information about other preserves and trails owned and managed by the Fallbrook Land Conservancy, a local nonprofit founded in 1988 to protect and manage special open spaces in the Fallbrook community.

Visitors to the booth, which will be open 8 a.m. through noon starting Friday, May 17, through Sunday, May 19, can also sign up for volunteer activities, join as new FLC members or renew existing memberships. A new text-to-give process is now available through the FLC. Donors can text "GIVE" to (760) 206-8111. An acknowledgement text links donors to an online donation form, and their contributions are processed immediately.

The event celebrates the FLC's acquisition last summer of two critical parcels at the Monserate Mountain trailhead totaling 7.34 acres. The addition ensures the preserve remains open in perpetuity for an estimated 48,000 people who visit the site annually.

"We are so excited to celebrate the inclusion of the Monserate Mountain trailhead in the preserve," Susan Liebes, chairman of the FLC's board of directors, said. "This trail benefits so many people from our community, and we hope they will all join us in the challenge of improving this special place."

Monserate Mountain Preserve was established in 2001 when the Heights of Pala Mesa partnership, headed by FLC co-founder Vince Ross, deeded 225 acres to the conservancy in connection with the establishment of a mitigation bank. It was not only the first mitigation bank implemented in north San Diego County; it also had a provision that was unusual at the time allowing public access on a specified system of trails. Monserate Mountain protects critical habitat for native wildlife, including the California gnatcatcher and other species.

The California gnatcatcher is a native songbird that nests and forages in moderately dense stands of coastal sage scrub. A recent survey of Monserate Mountain Preserve resulted in increased sightings of the bird.

"Monserate Mountain Preserve is a great example of what good stewardship will do," Karla Standridge, FLC executive director, said. "We are protecting the critical habitat for the species while providing recreational opportunities at one of our most popular preserves.

"It is also a good reminder of why it is important for visitors to stay on the designated trails and keep dogs on leash," Standridge said.

The "I love Monserate Mountain" campaign committee said they hope to raise enough funds to improve public access to the trail. Goals include regrading areas damaged by erosion, improving first-responder access, as well as adding new signage, a rest area and dog station. The campaign is ongoing through December. Individuals or organizations contributing $250 or more to the campaign will be commemorated at the trailhead with details to be announced.

Lydia Rossi, a local artist and longtime board member, has created a watercolor rendering of the envisioned new trailhead, which will be on display at the Monserate Mountain Preserve booth along with new brochures and maps, as well as new FLC T-shirts and hats for sale.

The morning hike will be led by Michelle Verdugo, who is an FLC board member and fitness enthusiast. Verdugo will highlight the reasons people are drawn to Monserate Mountain, including a love of nature and the challenge of conquering the climb to the peak where hikers enjoy panoramic views. Over the years, hikers have also been attracted to the area's close proximity to town as a convenient escape from their daily grind.