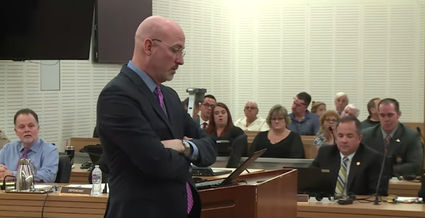 Lead defense attorney for Chase Merritt, James McGee, talks to the jury during his closing arguments on Wednesday, May 29 in San Bernardino.

One of these days, a jury of 12 people will begin deciding whether the State of California proved its case in the capital murder trial of Charles "Chase" Merritt accused of killing a Fallbrook family of four in February of 2010.

Though many expected closing arguments to conclude on Wednesday, May 29, that did not happen, and arguments will continue on Thursday, May 30.

Closing arguments began on Tuesday, May 28, and the prosecution, led by San Bernardino County Supervising Deputy District Attorney Britt Imes, attempted to put a bow on the state's case accusing Merritt of killing Joseph and his 43-year-old wife Summer, and the couple's young sons - 4 year-old Gianni and 3-year-old Joseph Jr. - and burying their bodies in a San Bernardino desert.

His more than four-hour closing argument was centered around the state's contention that greed and fear of prosecution as to why he killed his business partner.

Defense attorney James McGee had only started his closing arguments when Superior Court Judge Michael A. Smith called it a day and instructed prosecutors, attorneys, and the jury to return at 9 a.m. Wednesday, May 29.

During the trial, detectives testified that Merritt deposited checks worth thousands of dollars from McStay after the family went missing, using QuickBooks and even called QuickBooks from his cell phone, identifying himself as Joseph McStay and asking to transfer the money in the account.

Defense attorneys have said that investigators zeroed in on Merritt early on the case and never looked at anyone else. The defense repeatedly attempted to point the finger at another McStay business associate, Dan Kavanaugh, who they said was overlooked or purposely ignored by investigators.

Their Fallbrook home appeared to indicate they left in a hurry that day with fruit left out and clothes scattered about the house.

Detectives thought initially that the family had gone on a trip and would return after searches on one of the family's computers showed a web search about documents needed for children traveling to Mexico.

Boosting that theory was the discovery of the family's Isuzu Trooper was found parked in a strip mall near the Mexican border and the San Diego County sheriff's investigators then turned the case over to the FBI. 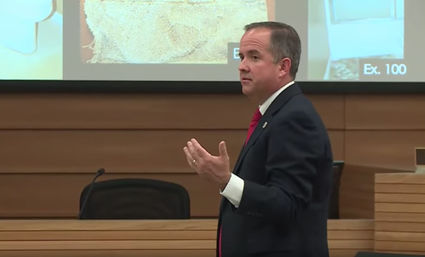 Records show that all four were beaten to death, most likely with a sledgehammer owned by Joseph McStay.

At that point, the investigation was taken over by the San Bernardino County Sheriff's Department. On Nov. 7, 2014, investigators announced the arrest of Merritt and charged him with four counts of murder.

Investigators believe that the McStays were killed at their home and transported by Merritt to the San Bernardino desert.

The closing arguments are being broadcast live on the Law & Crime Network and the network's YouTube channel and website.