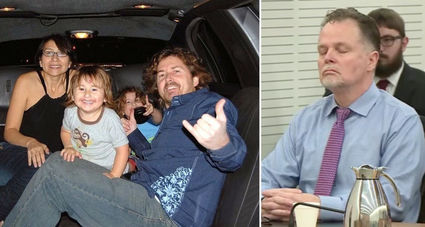 Charles 'Chase' Merritt found guilty on four counts of first-degree murder for the killing of the four members of the McStay family of Fallbrook on Monday, June 10 in San Bernardino.

After more than six months of testimony and deliberation and more than 9 years since Joseph and Summer McStay and their two young sons disappeared from their Fallbrook home, Charles "Chase" Ray Merritt was found guilty of murdering the family on Monday, June 10 by a jury in San Bernardino.

After 22 hours of deliberation following a 22-week trial that began on Jan. 7, the jury of 12 people on Friday, June 7 announced they had reached a verdict in the case, eliminating the chance of a hung jury in the trial.

Because during the course of the trial, the court was generally not in session on Fridays, the jury's findings weren't read until Monday morning.

A packed courtroom stood and waited for Superior Court Judge Michael A. Smith and jury as they entered the building. As Judge Smith unsealed the verdicts and briefly read the report, Merritt closed his eyes and fiddled with something on the desk in front of him.

Judge Smith then handed the verdicts to the courtroom clerk to read.

When she was done, the jury had found Merritt guilty of first-degree murder of all four McStay family members and found true the multiple-murder special circumstances charges.

There were audible gasps from the courtroom gallery, Merritt appeared stunned by the decision, closed his eyes and lowered his head, shaking it slightly. His eyelids appeared red.

Several of Merritt's supporters walked out of the courtroom when the verdict was read.

Because of the finding of special circumstance in all of the murders, the jury will be tasked with deciding between the two options for sentencing.

"We are going to proceed to the second phase of the trial," Judge Smith told the jury. "Where you will be asked to decide the appropriate penalty of two possible penalties. That will be much shorter than the first phase."

Prosecutors have said they would seek the death penalty if Merritt was convicted. The jury could also choose to sentence Merritt to life without parole.

A court official reportedly told the media that the Merritt family said they didn't want to speak to the media.

The McStay family and friends also refused comment, saying they would speak after the sentence was handed down.

"Obviously we're devastated, disappointed," said defense attorney Rajan Maline. "We're kind of shell-shocked actually. Based on the evidence, we did not expect this. From our standpoint, our client is innocent. That fight doesn't stop. We will continue to fight for our client because we believe in his innocence.

"Although we respect the process, we disagree with the jury's verdict."

"It's kinda shocking based on the evidence presented and the law in the state," he said. "We're going forward, that is where we are."

McGee said the defense team spent a couple of hours with Merritt after the conviction and said he was "in about the same state we are right now."

"He's disappointed as we are, but he is ready to continue fighting for his innocence and his freedom, as are we," McGee said.

When asked if it was a fair trial, McGee hedged on answering directly.

Asked whether the defense still believes someone else may be responsible for the crimes, Maline answered.

"The evidence was that there were three profiles that we were able to identify, our expert was able to identify, that were retrieved from the gravesite," he said. "Those are potential suspects, and since we're not allowed to run that through CODIS, which is the national databank of DNA profiles, only the prosecution, law enforcement can do that. Those three profiles still lay with the DA's office today.

"So, how the jury can come up with a guilty verdict today knowing that there are still three profiles from the gravesite, is from our standpoint, just (defies) logic. They didn't get the whole picture."

Maline said the district attorney's office presents the case and they presented an incomplete case.

"Because they presented an incomplete case, the outcome should be not guilty," Maline said. "And that's really what it comes down to.

"From our standpoint, this particular injustice can't go on, so we will continue to fight."

When asked whether there was anything the defense team could do to bring more attention to possible suspects or more evidence, McGee answered.

The penalty phase of the trial was scheduled to begin at 9:30 a.m. Tuesday, June 11, after press time.

Merritt was found guilty of bludgeoning to death Joseph and Summer McStay and the couple's young sons - 4-year-old Gianni and 3-year-old Joseph Jr. - in 2010 and burying their bodies in a San Bernardino desert.

Prior to the family going missing, Merritt was a subcontractor for McStay and the two were good friends by most accounts. Merritt designed and built custom fountains for Joseph McStay's business, Earth Inspired Products, but, according to prosecutors, he was in debt to the tune of more than $40,000 to McStay at the time of the murders.

After the family went missing, relatives contacted the authorities and detectives thought initially that the family had gone on a trip to Mexico. Boosting that theory was the discovery of the family's Isuzu Trooper was found parked in a strip mall near the Mexican border.

At that point, the San Diego County sheriff's investigators then turned the case over to the FBI. 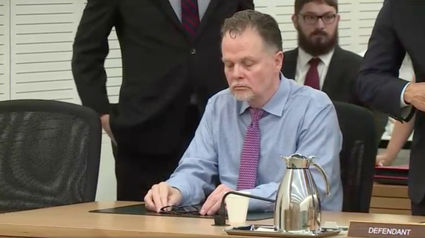 Chase Merritt reacts as four guilty verdicts were handed down by a San Bernardino County jury on Monday, June 10 for the murders of all four McStay family members in 2010.

According to the prosecution, the evidence showed that all four were beaten to death, most likely with a sledgehammer owned by Joseph McStay. On Nov. 7, 2014, investigators announced the arrest of Merritt and charged him with four counts of murder.

Merritt's defense attorneys argued that investigators zeroed in on Merritt early on the case and never looked at anyone else. The defense repeatedly attempted to point the finger at another McStay business associate, Dan Kavanaugh, who they said was overlooked by investigators.