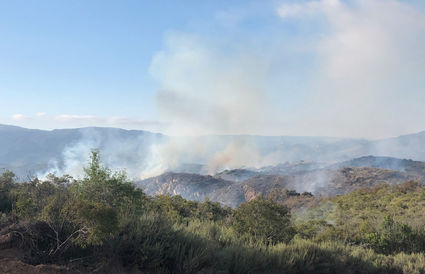 Military and civilian firefighters were teaming up to fight an 80-acre brushfire that started in an open area near the De Luz gate on Camp Pendleton on Thursday, June 20.

"The Weisgarber Fire is currently at 120 acres and 40% contained, with approximately 75 firefighters engaged," Shoots wrote in a press release. "Fire activity has decreased significantly, and firefighters expect to have full containment of the fire by midnight tonight."

CAMP PENDLETON - Cal Fire San Diego was working with U.S. Marine Corps Camp Pendleton firefighters on a vegetation fire on the base that had grown to 80 acres by 5:15 p.m. Thursday, June 20 near the De Luz gate entrance.

By 6:30 p.m., officials reported that the fire was holding at 80 acres with 40% containment and firefighters were making good progress.

There were no reports of threats to structures or nearby communities like Fallbrook or De Luz and no injuries at last report.

Firefighters are expected to remain at the scene through the evening.