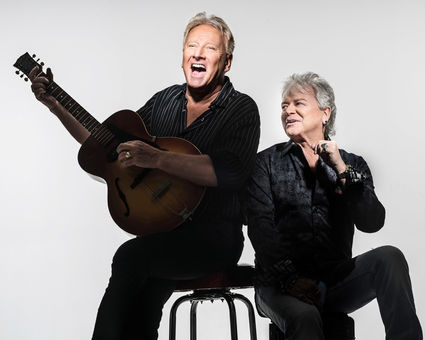 Maybe you don't think of the word "art" when you listen to soft-rock, but when I heard Air Supply in concert at the San Diego County Fair – the word "art" came to mind. Their music is melodic, lovely, and artistic. The song lyrics have substance, and provide emotional sustenance for the audience.

The songs are sung with passion and energy, which is especially significant because Graham Russell (singer and songwriter) is 69 and Russell Hitchcock (lead vocalist) is 70. The two make up Air Supply, which is a duo that crystallized as an Australian musical team in 1975. Russell, of English descent, and Hitchcock, an Australian, rose to fame with their unique and pleasant soft-rock sound. Select songs climbed to the US Top Ten list eight times.

At the Corona Grandstand Stage there is seating for over 8,000 – and I don't know how packed Levels 4 and 5 were, but Levels 1 through 3 looked like they were at capacity.

Air Supply became famous after I had already left school and was out on my own in the world. But, even in my twenties, and beyond, the songs hit a chord in my heart. I would listen to them on the radio and on tapes – yes – those unreliable cassette tapes that would often tangle and break. But, it worked for my purpose and the tapes brought me the pleasant music of Air Supply.

With clear strong voices the duo began the concert with "Sweet Dreams," which is a beautiful, melodic piece. Singing strong for an hour and a half, they sang familiar hits, including their #1 song – "The One That You Love." I had not heard these songs performed live since I attended the Air Supply concert at the California Mid-State Fair (San Luis Obispo) in the eighties.

At one point in the concert, both Graham and Russell walked down the aisles hugging people and singing, "Here I am, the one that you love, askin' for another day..." Of course it was an amazing moment, even for those of us in the third tier. Their touching gesture generated a lot of emotion. 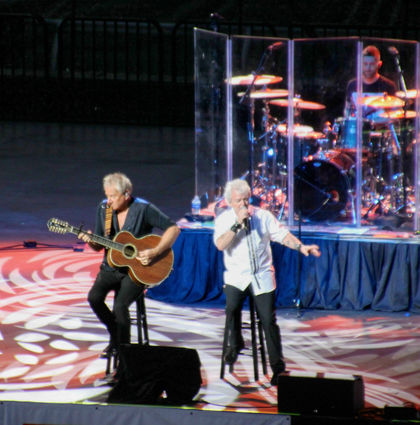 As the concert came to a close, "All Out of Love" rang throughout the grandstand as Air Supply, accompanied by the audience, belted out "I'm all out of love, I'm so lost without you..." In the darkness of the grandstand seating area, thousands in the audience stretched their arms up and waved their lighted cell phones like tiny beacons. Then...a standing ovation and raucous screams and cheers as the last note was sung.

The concert wasn't just a journey to the past, but it was an appreciation for the duo's longevity, the sustaining charm of their voices, and the endurance of their songs. Air Supply is part of my musical heritage and I am happy that they are still going strong. Or as Air Supply would put it: "Here I am, playing with those mem'ries again..."