A royal time in Windsor 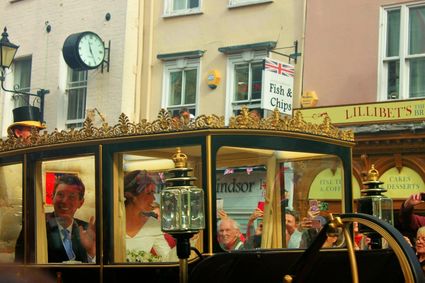 As the Windsor Car's Mercedes pulled up to the Langton House Bed and Breakfast, my heart welled with joy. I felt like I was coming home. The commodious Langton House, built in 1890 as a residence for Queen Victoria's minor government officials, is located on a quiet, tree-lined road not far from Windsor Castle. For the majority of my visits to Windsor, this welcoming abode has been my anchor point – a place to return after a lively day – a place to relish the day's experiences. A place to dream.

Famed for the largest inhabited castle in the world, the historic city of Windsor has captivated me since my first visit. Windsor Castle, with its acres of stone walls, has been home to England's sovereigns for more than 900 years.

St. George's Chapel, on the castle grounds, practically boasts of its stained glass windows framed by Gothic traceries. It is the keeper of much of England's history. In 2018, more history was made – in the form of two royal weddings. My mother and I were fortunate to tour the castle a week after Prince Harry and Meghan Markle's May wedding. Several wedding flowers remained, including a massive altar vase overflowing with fragrant white roses, peonies and lacy green foliage.

In October, another royal wedding – uniting Princess Eugenie of York and Jack Brooksbank – took place at St George's Chapel. I happened to be in town and staying at the Langton House, so I walked to the castle with hopes of securing a perfect place to view the procession. First I stood in the security queue for about an hour, then I kept my spot at the railing for two hours.

The streets were crisscrossed with Union Jacks draped from building to building, and a mannequin in the Madame Posh window wore a lacy white wedding dress made entirely of frosting. The crowd waved plastic Union Jack flags that were distributed at the security queue. It was sheer royal wedding frenzy.

When the procession began, the Queen's Guards marched, followed by the Scots Guards. Red-coated guards sitting straight on their massive white steeds preceded the carriage. Then, Princess Eugenie and her husband emerged from the castle grounds riding in the gilt-rimmed, glass-enclosed Scottish State Coach pulled by four grey horses. I was close enough to see the detail in Princess Eugenie's diamond and emerald-studded tiara. I felt like I had stepped into a fairy tale.

After the procession, I enjoyed lunch from my window table at the Harte and Garter's Tower Brasserie directly across from the castle. The duck confit served with braised red cabbage, mustard mash and asparagus was a meal fit for a princess. The duck was tender, and the red cabbage was a perfect blend of sweet and savory. As I enjoyed my meal, I watched a string of tourists taking selfies against the castle wall. A flock of birds soared overhead, casting winged shadows on the ancient castle stones.

The Drury House is also a wonderful lunch spot complete with wavy wood paneling and an intricate wood and stone fireplace. The structure was built in 1645 to accommodate staff from Windsor Castle. But, legend has it, that a tunnel connecting Drury with Windsor Castle was used by King Charles II to visit his mistress, Nell Gwyn. The tunnel is now barricaded. I have enjoyed several traditional English meals in the historic, fetching atmosphere of the Drury House.

My mother and I were fortunate to attend the 75th Royal Windsor Horse Show. It was our third visit, but Queen Elizabeth II has been present at the show since the event's inception in 1943. We sat in the "Windsor Enclosure" near the Royal Box. From our front-row seats, we could hear the rhythmic cadence of hoof beats, and the gasp of the audience when a horse cleared a particularly high "jump." Queen Elizabeth II, dressed in an elegant pink suit with matching hat, presented the trophies. Since we were not far from where the trophies were presented, I, once again, felt like I had stepped into a story book.

How do I experience Windsor when there are no royal affairs? Oftentimes, I book Windsor Cars for private tours, including Hampton Court and Highclere Castle. A preferred destination is Royal Holloway, University of London, near Windsor. As our car passes through the massive gates, I am in awe of the extraordinary red Brick Founder's building, built in Gothic Revival Style and completed in 1881.

Beautiful in the spring when lavender-hued blossoms surround them are the stately Roman ruins located in Windsor Great Park's Virginia Water area. The Romans didn't build them there, but the awe-inspiring columns were part of a Roman temple that was transported to England in the 19th century. 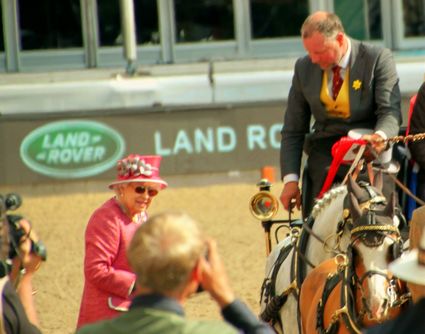 Flowing through Windsor is the River Thames, and a perfect way to enjoy it is the two-hour French Brothers River Cruise. From my open-air seat I savor the view as we drift past willow trees, swans, manor houses, boathouses and churches. The narrow boats are always a curiosity with their bold colors and fanciful decorations. They look like sea-going Gypsy caravans. The willow trees along the river banks are perfectly trimmed, thanks to the swans who enjoy nibbling at the leaves. The ride through the Boveney Lock is intriguing. The crew quickly ties up the craft; then, it's such a strange sensation as the boat slowly sinks five feet.

The historic and castle-like Oakley Court on the River Thames was our home during the Royal Windsor Horse Show. Elegance dominates the Victorian Gothic hotel built in 1859. We were welcomed with a bubbly glass of Champagne, which we sipped from cozy chairs at the open window of our third floor room. Birds sang sweetly as we watched boats drift along the river. The expansive green lawn, ancient trees and trickling fountain completed the serene setting. The Oakley Court embodies all that Windsor is to me – history, elegance and beauty – and a few bubbly surprises.

Editor's Note: Readers are welcome to send their summer vacation stories and photographs with captions to [email protected] for possible publication in a future issue.