Motorist rescued from burning van on Interstate 15 in Fallbrook 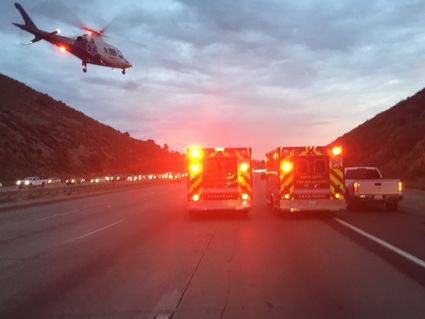 The driver of a van that caught fire was taken by Mercy Air helicopter to Palomar Hospital with major injuries.

FALLBROOK - Firefighters rescued a 31-year-old man from his crumpled and burning van on Thursday, July 25 after the motorist slammed into the back of a semi-truck on Interstate 15 in Fallbrook, authorities said.

The crash, involving a 2017 Chevrolet van and a semi-truck, was reported around 5:10 a.m. on northbound Interstate 15 near Mission Road, California Highway Patrol Officer Mark Latulippe said.

A man behind the wheel of the semi-truck was heading up a hill in the far right lane with the hazard lights on when the 31-year-old man driving the van slammed into the back of the big rig, he said.

The van driver later told an officer that he might have dozed off because he remembered driving in the lane to the left of the semi-truck, then all of a sudden the truck was right in front of him, Latulippe said.

Crews responded to the scene, extinguished the fire and freed the man from the wreckage by 5:55 a.m., Berry said.

The semi truck driver was uninjured in the crash.