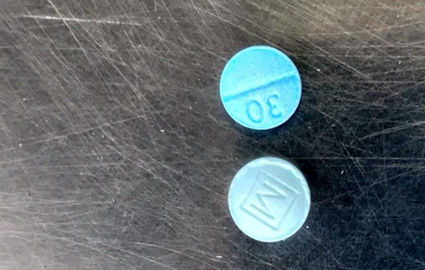 San Diego County Sheriff's Department issued a warning on Thursday, July 25 regarding counterfeit drugs that may be responsible for several deaths in the county within the past 36 hours.

The blue tablets, known as M-30s, have been involved in fatalities in Lakeside, Poway, Santee, and Valley Center over a 24-hour hour period beginning Wednesday, according to sheriff's officials.

The highly dangerous street drug, a common form of counterfeit oxycodone, contains fentanyl, a narcotic so powerful that a speck the size of a grain of salt can kill a person, authorities said.

Detectives are working with first responders in the region to see if they have received similar overdose calls in recent days, according to the sheriff's department, which advises that any pill obtained without a prescription should be considered unsafe for consumption.