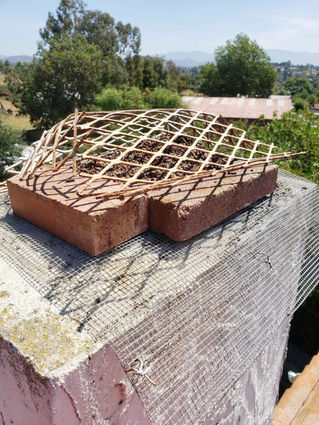 This McGyver-style spark arrestor works but is not up to code.

Now and again, it's fun for me to share a real-life Fallbrook real estate story. It's a nice break from the serious topics that affect real estate, like lack of supply, affordability, legislation directed at housing or rent control, and the additional requirements on home builders or homeowners that impede and impact all the above. So, join me is a story that will bring a smile to your face and even perhaps a chuckle.

In the spring, we were contacted by a local family who were preparing to sell their parent's home. Their mom had passed and it was time to hold onto the memories but part with the home they all loved because of the memories they had for it.

On the surface, the home looks very nice. It is located near the end of a quiet street, elevated on a hill, which provides nice views to the east and cool breezes from the west.

The home is a single story, with a pool, on almost ¾ of an acre. It needs updating but appears to be clean and boasts an open floor plan. It was priced to attract first time home buyers or buyers looking to downsize in both structure and land.

We were able to get multiple offers on the home. Sellers were thrilled! Then the fun began. As I mentioned, it is not updated, but appears serviceable. The Home Inspection uncovered many unseen deficiencies, but one superseded all the others.

We noticed a noxious smell, which was odd, since no one had lived in the home in months. The pest inspector discovered bees near the chimney, so a bee removal specialist was hired to remove the bees and clean out any visible honey and honeycomb. There were no dead pests in the attic or under the home, yet the smell did not dissipate.

We got the pest inspector out for a second visit and noticed that there was a wall in the family room that seemed to be attracting flies and gnats. It was determined that the wall needed to be opened-up to determine what, if anything, was attracting the insects. When the wall was opened-up, the cause of the horrible odor was discovered.

Inside the wall, were five pounds of rancid honey and abandoned honeycomb and a dozen dead rats that had gotten in the wall to get to the honey. Too bad for them, because they never got out. Perhaps they were in a sugar coma and then the noxious odor killed them.

The extent of the mess spanned the width of four stud sections and was equally as tall. The rats ate through an electrical line inside the wall. We made lemonade out of lemons and added an electrical outlet with cable connection for the new owners' flat screen TV to hang above the fireplace and then the area was thoroughly cleaned out, disinfected and re-sealed.

Another oddity of the home was the "vintage" spark arrestor. We all know that guy, a self-anointed "MacGyver," who knows how to fix anything out with just about anything.

In times of trouble, make no mistake, I want one of them helping me. But in this case, it exhibited itself in the one of a kind spark arrestor: bricks stacked around the flue and holding down a mesh covering the chimney cap with a bent metal rack, stacked on top of the bricks. This has to make you smile. The ingenuity was awesome, the execution not so much. 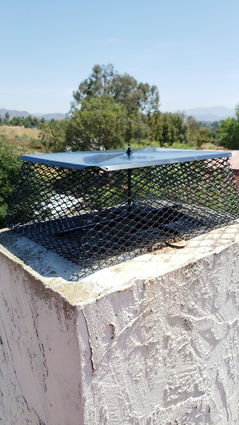 The corrector way to build a spark arrestor is seen here.

The best part of this story is the way in which both the trustee and the buyers dealt with it. The trustee looked at the situation as if he was buying it for his children, and agreed to fix everything that was substandard, not working or unsafe.

The buyers, who were first time home buyers, did not allow the extent of the issues, scare them off. They love the home, its location and the lot. They needed the trustee to make things right, and when he did, they relaxed about the process and were thankful for the end result.

They got their first home, in lovely Fallbrook, and the good memories from the previous owner will continue its next chapter with some new characters.