Arborglyphs on trees document the west 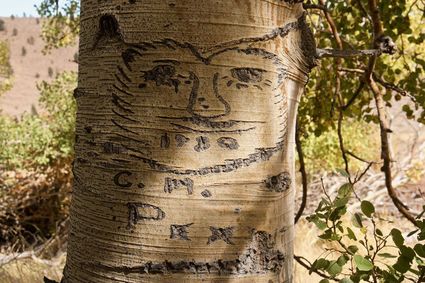 The carvings on aspen trees and other soft woods was a way that Basque sheepherders would leave their mark out in the west.

Large ranches in the western United States were raising vast amounts of sheep to supply food for the railroad workers in the developing train empire across America from the 1850 to the 1930s.

One supply of food was being raised by Basque sheepherders who migrated to California, Oregon, Nevada, and Idaho out in the western prairies and up in the aspen forest. Most of these young lads came through Ellis Island and migrated west to work as sheepherders.

The tending of these sheep herds was a hard and lonely life for they had to survive the cold of winter and the heat of summer. Most had a small wooden wagon with their minimal belongings, cooking implements, a dog, horse or donkey and moved from pasture to pasture. The aspen forest gave some shelter along with some crude cabins that were built amongst the trees.

As they lived in the forests, they began to carve stories about their homeland from the Pyrenees mountain range between France and Spain on the white bark of aspen trees.

They spoke Euskara and are believed to be one of the oldest indigenous groups in Europe.

Even though they were surrounded by living animals, their life was lonely. To pass the time they began to carve arborglyph symbols on the aspen trees. These tree etchings would depict simple notes like their name, homeland village, birth dates and various pictures on the trunks, even some racy carved pictorials.

As the bark of the softwood would start to callus like a scar, the carvings started taking on a dark hue and became more pronounced and visual to see.

A group visits the aspen trees near Lee Vining on Hwy. 395 just north of Bishop to study the tree arborglyph culture.

These carvings were like a mini historic page in time that documented that ‘they were here” from the other side of the world and helped in the food chain in the building of the American West.

Their life up in these deciduous forest were harsh. They would leave their mountain encampments on occasion to travel down to the villages to enjoy a little grog and the nightlife and the local pleasures.

These men were paid very little and food supplies were brought up to their woodland shelters from the ranch boss to see how the herds were being tended. When portions of the flocks of sheep were mature, they were butchered and sent out by wagon trains to supply the large numbers of railroad workers out in their rural encampments. This process had to be well planned and the meat was salted to be preserved in wooden barrels for shipment.

The sheepdogs played a very intricate part of herding the flocks and keeping them in a pack which was an ongoing challenge. Can you just picture at night under star-glazed summer skies, the wolves and coyotes howling, a hooting owl, the rustling of a breeze whistling through the trees broken by a soft harmonica played by a young lad?

These sheepherders also had to be part veterinarian and aid in the raising of young baby lambs to sustain the ever building flocks that were born out in the wilderness. These baby lambs had to keep up with the ever-moving flock and that was a task onto its own to maintain.

Remember, in those days there were no fences to corral the sheep that were constantly moving and grazing new growing fields for food. With all the various tasks at hand, I’m sure there were many sleepless nights tending the sheep for these hardy men.

I had the great fortune a few years ago to travel up to Lee Vining on Hwy. 395 just north of Bishop with a good buddy to spend a weekend out in these aspen forests and study the tree arborglyph culture.

The three-day adventure brought together two dozen folks with a wide array of backgrounds wanting to learn more about the men, their living conditions and the aspen trees. We hiked through many stands of aspen groves and viewed what the lifestyle of these Basque men were like, and it was truly fascinating and extremely informative.

As we sat amongst the aspen forest, we had our packed picnic lunch and listened to the quivering of the tree leaves that seemed to be echoing past times dancing through the setting and you became as one with these historic trees and that was a good thing.

But today some of these old aspen strands are failing due to insects and diseases and are dying. Once these trees die, they become susceptible to forest fires and the historic carvings will be lost forever.

The Mono Lake Committee sponsored this field trip and has been documenting these tree storytellers to be able to pass it along for the future. There are several books on this subject and are available at the Mono Lake Eco-center.

These vast stands of aspen trees have a built-in survival system through their running network of roots and can re-sprout after fires, and the stand can be regenerated and will grow back but without the unique tree carvings,

On the Saturday evening, our group was treated to a homemade Basque dinner with a lamb dish and drinking wine from a bota-bag. We also enjoyed some melodic music from a mandolin, and a jovial time was had by all.

The Mono Lake area is the catchment basin for some of the melting Sierra snows which bring precious water to Southern California. This year was a good year with Mono Lake filling up from last winter’s melting snowpack.

Fall is a wonderful time of the year to see the changing of the autumn leaves of the populus tremuloides “quaking aspen trees.” When the aspen leaves start their color change, it is a true sight to behold with the colorful fluttering foliage on these magnificent native trees.

Perhaps you have done some arborglyphs yourself by carving your name or girlfriend's name an old oak tree surrounded by a curved heart-shaped symbol.

Petroglyphs was another way early man left their messages but on rocks and stone some dating back thousands of years and are found around the world documenting their life, animals and symbols of those times.

If you want to make another tree trekking adventure when up in that area, you might consider going to the White Mountains off Highway 395 in Lone Pine and visit the ancient bristlecone pines with some trees dating back over 5,000 thousands years and still alive.

So when we expand our thinking and look to nature, she has many stories to tell us about the earth’s timeline and it’s out there, but you just have to look, explore and be adventuresome.

Remembering we have come from the earth and shall return, so why not do what you can to preserve, protect, preplan, and plant for the future with trees.

Time is ticking and you can have a positive part of the biological formula in the caring for Mother Earth. Is your life working with or against the challenges that exists today for the globe? You can be a part of the solution, but you just have to commit and make a difference. We need to replenish the trees that have been lost to fires, drought, hurricanes, floods, bugs, and diseases across the globe now.

“May the forests be with you.”

Roger Boddaert, The Tree Man of Fallbrook & Maker of Natural Gardens, can be reached for creative, sustainable environments around your home, (760) 728-4297.