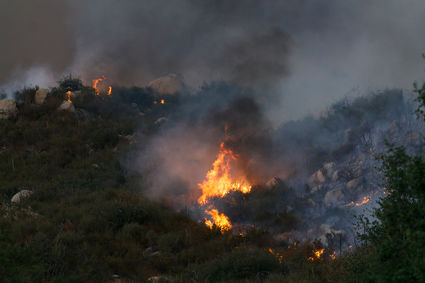 A wildfire burns near the Santa Rosa Plateau in this file photo.

RIVERSIDE - The Los Angeles, Riverside and San Diego metropolitan areas have the most homes in the Western United States considered to be at high or extreme risk of being damaged or destroyed in a wildfire, according to a report released today by a real estate information service.

According to CoreLogic's 2019 Wildfire Risk Report, in the 13 Western states most commonly affected by wildfires, there are 775,654 residences deemed to be in extreme risk of being damaged or destroyed during a wildfire. Another 924,623 are at high risk, 326,838 in moderate risk and 28.7 million considered to be at low risk.

Broken down into metropolitan areas, Los Angeles topped the list with 121,589 residences considered to be at extreme or high wildfire risk. Riverside placed second with 108,787 at extreme or high risk, and San Diego placed third with 75,096.

The report cited a number of factors contributing to wildfire risk, including the presence of fire-feeding vegetation, orientation and steepness of mountain slopes, areas with recurring fire activity and the proximity of homes to wildland areas.

"... The close proximity of these homes to the wildland puts them in an area where burning embers can be carried by wind and deposited on structures a mile or farther from the fire source,'' according to the report.

CoreLogic notes in the report that the geographic mix of development and wildland areas always creates "a threat of destruction to property and consequently loss of life.''

"Wildfires in the Western United States have always been a part of the ecosystems and landscape,'' according to the report. "Prior to human habitation, lightning strikes often caused naturally caused ignitions. However, the population of the Western United States now tops 100 million and the potential impacts of wildfires on humans and humans on wildfires are inextricably linked.

"People are more likely to cause wildfire ignitions by a factor of 4-to-1 as compared to natural causes. While some human-caused ignitions are the result of arson, many are caused by accidental or unintentional ignitions from normal human activity.''

The report found that 1,823,153 acres were burned in California wildfires last year, more than any other Western state.

"A review of the past few years reveals not only a continuation of the intense fires and associated destruction in the United States but an escalation of these events,'' the report states. "Looking specifically at California, 2017 and 2018 were responsible for more wildfire-related property damage than the state has experienced in any two consecutive years of its history.''