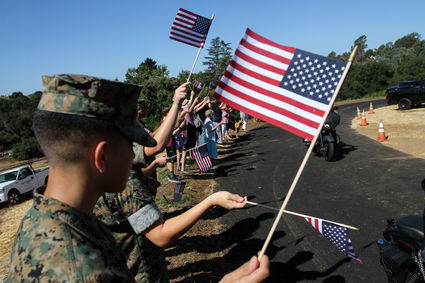 People gather to celebrate the completion and key ceremony for wounded veteran U.S. Army SPC Joey Paulk who is receiving a home from Homes For Our Troops in Fallbrook, Sept. 7.

About 100 people were on hand to witness Army Specialist Joseph Paulk receive the keys to his new, specially-adapted new home in Fallbrook Saturday, Sept. 7.

The home, constructed by the general contractor, Youngren Construction of Fallbrook and funded and facilitated by the national nonprofit organization, Homes For Our Troops, features more than 40 major special adaptations such as widened doorways for wheelchair access, a roll-in shower, and kitchen amenities that include pull-down shelving and lowered countertops.

"As the walls started coming up and as the interior started coming together and I started actually seeing and experiencing firsthand the intricate details of the adaptations that they put in the house to make my life that much more comfortable and much more independent really then it started sinking in about how great this house is going to be on a day in and day out life for myself and for them," Paulk told the crowd. "Not just physically, but mentally. When (his fiancee) leaves the house, she can now leave in a better state of mind, knowing that when I'm home, I can take care of myself a little bit easier and be a little bit more productive. When I'm home alone, I feel a little bit more at ease knowing that I can take care of myself, but it will be easier as well."

Paulk was severely injured while serving in Afghanistan. On July 5, 2007, during his first deployment, Paulk was serving with the 546th Military Police Company in Southern Afghanistan when his convoy was struck by an improvised explosive device. He sustained burns to over 80 percent of his body and lost all his fingers.

With burn scarring all over his body, Paulk is unable to sweat and is constantly in danger of overheating in warm climates. That means the air conditioning system in the house could be a lifesaver during extremely hot days.

"I overheat very easily, especially my internal organs," Paulk said. "A lot of the heat gets trapped inside of my body. So, it's very dangerous for me to be out for too long. This house having a controlled environment on a daily basis is physically and mentally comforting."

Paulk said he bought a house in California previous and dealt with the things he couldn't control, the things that made the house difficult for him.

"One of the biggest mottos in the military is 'adapt and overcome,'" he said. "So, I adapted and overcame whatever trials and tribulations I had, not knowing that there were things out there that could make my life easier."

Paulk thanked Youngren, Homes for Our Troops and a plethora of sponsors who contributed to making the house possible and for listening to his suggestions on making the house livable for him.

"They're things in the house that I'm excited to embrace and endure on a day-to-day basis just to see how much easier my life's going to be," he said. "I just want to say thank you for being here. Thank you guys for making this a reality and no longer a dream. Let's go inside and take a look."