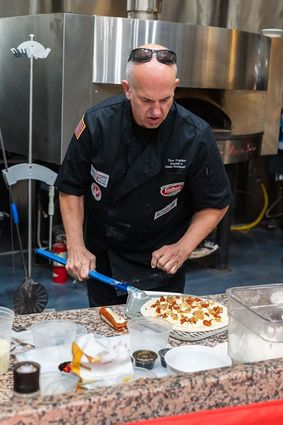 With the help of Marra Forni and the Pizza University, the U.S. Pizza Team sought out the best pizza-making talent to represent the United States at the European Pizza and Pasta Show in London, England, in November.

Droves of the best pizzaioli from all over the country competed in the Pizza Classica category. Working with high-heat ovens, these pizza chefs built and baked their best pizzas in 12 minutes using ingredients and sauces of their choice. The only stipulations? They had to keep their pie between 12 inches and 14 inches round and baked on the oven stone. The grand prize was a trip to compete in the European Pizza Championship for international bragging rights.

Trupiano is getting ready to travel to Atlantic City for the Caputo Cup Pizza Competition, then off to Firenze, Italy, where he is in the Top 6 out of 800 hand-selected entrants to compete in the gourmet category.

Not stopping there, in October, Trupiano will travel to Dallas, Texas, for his second appearance at the World Food Championship after making the Top 10 in the world in the bacon category in 2018.

Trupiano said of this year's events, "You would think that it would get easier to compete, but it's actually getting harder. The competition keeps getting tougher and tougher every year. If you don't up your game, you will never be holding those trophies."

Dominic's Italian Restaurant in Oceanside, also part of the Trupiano Restaurant Group, will again be the host of the West Coast U.S. Pizza Cup, Dec. 9. Calling pizzaioli from across the country, they will vie for the title of best in the nation and battle for the grand prize, a trip to compete internationally with the U.S. Pizza Team. 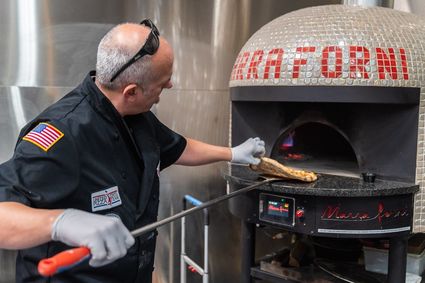 Tore Trupiano checks on the doneness of his pizza at the pizza oven.

The U.S. Pizza Team competes all year-round in various culinary and acrobatic trials across the country. Winners of each trial in the U.S. win a trip to compete on the international stage in competitions around the world.

For more information about the U.S. Pizza Team, visit http://uspizzateam.com.