Bill Hitt was 19 years old when he enlisted in the U.S. Coast Guard.

Two local veterans were honored for their military service by Quilts of Valor and Rainbow Valley Grange, Nov. 10. Both William Hitt and Ernest Gale are Rainbow residents who served during World War II.

Organized by Grange member Jonnie Fox and the Rancho Bernardo Chapter No. 582 of QOV, the presentation of the quilts took seven months of planning and was appropriately scheduled for the day before Veterans Day.

Hitt, a longtime member of Rainbow Valley Grange, enlisted in the U.S. Coast Guard, serving from Dec. 4, 1942 to March 13, 1946. He was assigned to duty aboard the USS Celtic in May 1944; the station fuel ship for Admiral Nimitz CINPAC command served vessels through the Solomon Islands from Guadalcanal to Bougainville.

The ship was later sent to the Philippines and then to Okinawa where Kamikaze attacks occurred nearly every night. The USS Celtic was ordered back to the States in October 1945 and Hitt was transferred to Los Angeles, where he served as a radioman until being honorably discharged.

Gale was drafted into the Army, June 16, 1944 and assigned to the 41st Division. He eventually deployed to Leyte in the Philippines, July 9, 1945. After a stop at Mindanao Island, his division participated in the occupation of Japan. By Oct. 20, 1945, they were sent to inspect the remains of the atomic bomb blast in Hiroshima.

A Private First Class, Gale spent 11 months in Japan and was sent home Sept. 26, 1946 to serve on an Army base near Chicago. Upon his discharge, he received a 'signed letter' from President Harry S. Truman thanking him for his service.

Presentation of the quilts was made by Carol Huff of QOV, who was accompanied by Sandra McCullough, group leader of the Rancho Bernardo QOV chapter, who provided the quilt for Rasp. The quilt given to Hitt was made by his family.

The veterans were joined by family members at the grange hall, along with more than 30 grange and community members.

The ceremony included the singing of the National Anthem led by Sandi Johnson Weidler and a presentation of wooden flags made and donated by a veteran who described them as "rustic torched flags, not perfect, but neither are we," said Huff. An Andrews Sister Tribute was performed by Jonnie Fox and The Satinettes and "God Bless the USA" was led by Tony Suraci, singer and Rainbow resident. A BBQ lunch was served after the ceremony, prepared by Chick with Pits.

The mission of QOV is to create healing quilts of valor to comfort those affected by war, explained Huff. Starting in 2003, hundreds of volunteers across the country have contributed squares for the quilts that go beyond words as a tangible sign of appreciation for veterans, she added.

To learn more about QOV and how to request a quilt, visit https://www.qovf.org/. 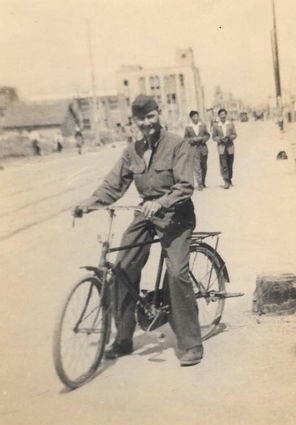 Ernie Gale goes for a ride while stationed in Japan in 1946.