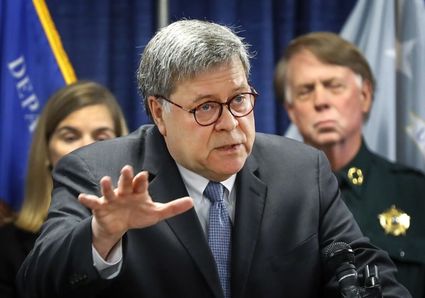 Attorney General William Barr, alongside officials from the Bureau of Alcohol, Tobacco, Firearms and Explosives, announces the launch of Project Guardian, an anti-gun violence initiative, during a news conference at the Davis-Horton Federal Building in Memphis, Tennessee, Nov. 13. Mark Weber/Daily Memphian via AP photo

U.S. Attorney General William Barr passionately inveighed against the left-wing anti-Trump "resistance" movement that is "using every tool and maneuver to sabotage" the Trump administration while systematically "shredding" norms and undermining the rule of law, in a speech to lawyers at a Federalist Society convention in Washington.

The speech Friday, Nov. 15, came hours after a federal jury convicted political consultant Roger Stone, one of President Donald Trump's informal campaign advisers, on all seven counts he had been charged with. Stone was found guilty of obstruction, witness tampering, and making false statements to Congress in connection with the investigation into Russian interference in the 2016 election.

Barr said in his talk, which was frequently interrupted by cheers and applause, that "immediately after President Trump won election, opponents inaugurated what they called 'The Resistance,' and they rallied around an explicit strategy of using every tool and maneuver available to sabotage the functioning of his administration."

"Now, 'resistance' is the language used to describe insurgency against rule imposed by an occupying military power. It obviously connotes that the government is not legitimate," Barr said. "This is a very dangerous – indeed incendiary – notion to import into the politics of a democratic republic. What it means is that, instead of viewing themselves as the 'loyal opposition,' as opposing parties have done in the past, they essentially see themselves as engaged in a war to cripple, by any means necessary, a duly elected government.

"In waging a scorched-earth, no-holds-barred war of resistance against this administration, it is the left that is engaged in a systematic shredding of norms and undermining the rule of law.

Barr mocked critics of the "unitary executive" theory of presidential power, which he and many in the legal community embrace, but which some Democrats deride as a newly invented doctrine.

"One of the more amusing aspects of modern progressive polemic is their breathless attacks on the 'unitary executive theory,'" Barr said, according to a transcript of the remarks as prepared for delivery. This idea is portrayed "as some newfangled 'theory' to justify executive power of sweeping scope."

"In reality, the idea of the unitary executive does not go so much to the breadth of presidential power. Rather, the idea is that, whatever the executive powers may be, they must be exercised under the president's supervision. This is not 'new,' and it is not a 'theory.' It is a description of what the Framers unquestionably did in Article II of the Constitution," Barr said.

The overly burdensome demands presented by lawmakers throughout the Russian electoral interference investigation and the many other congressional probes of the Trump administration are calculated to "incapacitate" the administration, instead of to engage in legitimate oversight exercises, Barr said.

"I don't deny that Congress has some implied authority," the cabinet member said. "But the sheer volume of what we see today in the pursuit of scores of parallel investigations through an avalanche of subpoenas is plainly designed to incapacitate the executive branch and indeed is touted as such."

The framers of the Constitution expected the three branches would jostle and joust with each other in a process that was "not only natural, but salutary, and they provisioned each branch with the wherewithal to fight and to defend itself in these interbranch struggles for power."

But the "deck has become stacked against the executive" branch, he said.

"Since the mid-60s, there has been a steady grinding down of the executive branch's authority; that accelerated after Watergate. More and more, the president's ability to act in areas in which he has discretion has become smothered by the encroachments of the other branches," he said.

One example is the way the Senate has been involved in an "unprecedented abuse of the advice-and-consent process," he said.

"The Senate is free to exercise that power to reject unqualified nominees, but that power was never intended to allow the Senate to systematically oppose and draw out the approval process for every appointee so as to prevent the president from building a functional government," Barr said.

"Yet that is precisely what the Senate minority has done from his very first days in office," Barr said. "As of September of this year, the Senate had been forced to invoke cloture on 236 Trump nominees – each of those representing its own massive consumption of legislative time meant only to delay an inevitable confirmation. How many times was cloture invoked on nominees during President Obama's first term? Seventeen times. The second President Bush's first term? Four times. It is reasonable to wonder whether a future resident will actually be able to form a functioning administration if his or her party does not hold the Senate."