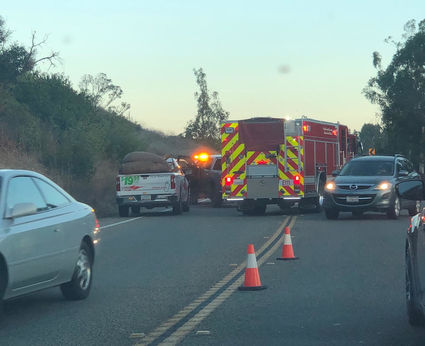 A crash late Friday afternoon sent one person to a hospital and caused a mile-long traffic backup on East Mission Road in Fallbrook.

A crash on East Mission Road in Fallbrook sent one person to a hospital and snarled traffic late Friday afternoon.

The two-vehicle collision was reported at 3:45 p.m. on East Mission near Valentine Lane, according to information from the California Highway Patrol.

One person declined medical attention, while another was taken by paramedics to a local hospital with non-life-threatening injuries, according to North County Fire Protection District spokesman John Choi.

The crash caused a traffic backup of about a mile for eastbound motorists. Lanes were cleared by about 4:30 p.m.