"It's been an amazing 15 years. Thank you, Fallbrook" ~Faro Trupiano 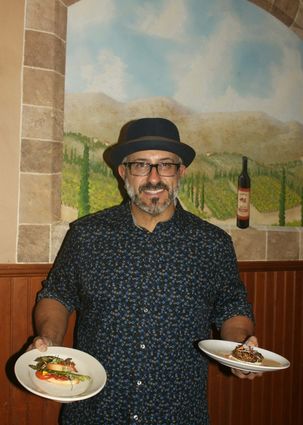 I venture into a restaurant where tantalizing aromas swirl about the room. Murmurs of conversation, punctuated with an occasional burst of laughter, evoke a cheery ambiance reminiscent of a sidewalk café in Italy. These components have been intertwined for 15 years at Trupiano's Italian Bistro in Fallbrook. Faro Trupiano founded the establishment in 2004, and it has been a success since the doors were opened. The combination of the owner's love for people and his passion for delectable cuisine, ensures future success.

In 2002, the bistro was only a vision when Trupiano stood in the parking lot dreaming of one day opening a restaurant in the building on Main. That dream became a reality two years later.

"After 15 years, the emotion I feel most is gratitude," he said. "To have a restaurant this long is so exciting – I can't believe it has been 15 years. The customers become family. I appreciate all of the support over the years."

When asked what has made the restaurant a success, Trupiano replied, "Consistency. There are people who have been dining at Trupiano's for years and years. The reason that they are so loyal is because the food is consistent, and the service is consistent."

On Nov. 21, Trupiano hosted a delightful evening of celebration with a four-course gourmet meal and choices for each course. Some of the choices included: Crab Stuffed Portobello, Warm Butternut Squash Salad, and Mushroom Short Rib Bisque. The inventive menu items were created and prepared especially for the anniversary dinner.

The celebration menu – with a Continental European flair – was created through a collaboration of two chefs. Chef Gerardo Herrera, who has been with Trupiano's for the entire 15 years, and Chef Eric O'Connor, from 127 West Social House, another Trupiano establishment, worked to create the menu.

The dinner was truly a success – diners ebbed and flowed from the restaurant for five hours. When I was there, every table was occupied.

Trupiano's thick, but velvety, "Filet Mignon" was ambrosia. Prepared perfectly – it was reminiscent of cuisine at the Aria Hotel in Budapest. The meat was drizzled with a Madeira wine reduction sauce, which lent a sweet flavor to the savory filet. Asiago gratin potatoes had just enough cheese to make them flavorful, but not too crisp. Rounding out the serving was a tender vegetable medley with carrots, green beans and yellow squash. The entrée was vibrant – both in presentation and flavor.

I savored every bite of the artistic and cloud-like "3-Layer Mousse" crowned with white chocolate shavings and colorful edible flowers. White chocolate mousse, chocolate peanut butter mousse, and chocolate mousse, comprised the layers. My fork passed through each layer effortlessly. The dessert was resting in a pool of citrus crème anglais, which lent a taste of vanilla and a hint of mint flavor.

The restaurant's traditional menu offers a wealth of options. Trupiano commented, "This is our core menu – we might add new items, but we will probably go the duration with this menu." 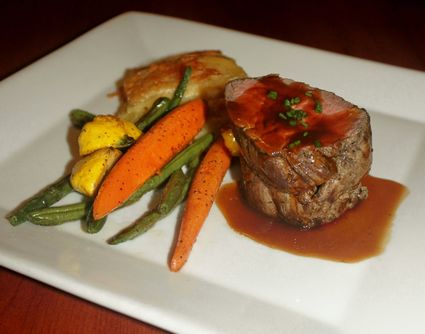 Trupiano is of Italian descent and has traveled to Italy researching the country's varied cuisines. He also develops his own recipes. The bistro's menu is brimming with traditional Italian pasta entrées – some with the touch of Trupiano's mother, who has always been an inspiration to him. She emigrated from Sicily while in her twenties. The tiramisu, inspired by his mother, is a delicate delight.

The celebration night was a metaphor for the entire 15 years. Delicious, inventive food, grateful patrons, attentive and friendly servers, plus a cheerful ambiance. It was a lovely, lively celebration of a restaurant that truly serves the community.

Trupiano's Italian Bistro is located at 945 South Main Avenue, Fallbrook, California. Contact them by telephone at (760) 728-0200, or online at https://trupianorestaurantgroup.com/.