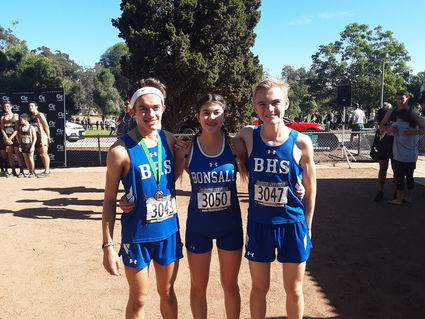 Bonsall High School cross-country runners, from left, Alan Alanis, Milana Collier and Ethan McFarland pose for a photo after finishing in the top 10 in their respective races at the Frontier Conference League Championship meet, Nov. 14.

The three Frontier Conference cross-country leagues had a combined league championship meet, Nov. 14, on the NTC Park at Liberty Station course in San Diego, and the top 10 boys' finishers and the top 10 girls' finishers from the entire conference were given all-league recognition including three Bonsall High School runners.

Bonsall senior Austin Alanis placed third in the boys' race and sophomore Ethan McFarland was 10th in that competition. The girls' race included an eighth-place finish by sophomore Milana Collier.

"I'm very happy about it. I was hoping to get second, but Pablo Chapman...