Wylie reopens gallery as a space for the community 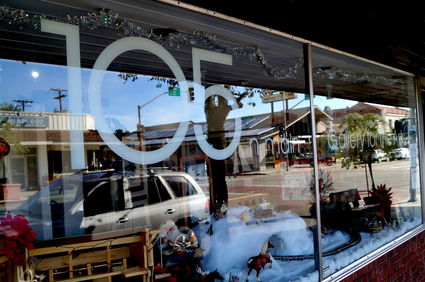 105 N. Main Gallery is reimagined as a gallery featuring artists, collectible clocks, sculptures and will serve as an educational and special event space.

Ron Wylie didn't want to see a bunch of shuttered windows in the space that had recently been Brandon Gallery in the building he owns on Main Street during the Avocado Festival in April.

"That'd be really bad for downtown to have this be a vacant space," Wylie said in what is now called 105 N. Main Gallery. "It doesn't present the right image for Fallbrook. That's something I've been working hard on ever since I joined Connections 25 years ago and we start putting on the Hot Summer Nights."

"They said, 'well, we'll paper up the front windows,'" Wylie said. "I said, 'no, you're missing the point. That's not the image we want to present. We want it to look open and vital.'"

Wylie, along with JP Framing's Jennifer Paprock talked about the new version of the gallery they were creating in the space while Wylie tinkered with a clock he was fixing.

In the beginning, in order to keep the door open and the space looking active, Wylie said he brought in a bunch of finely crafted clocks he had collected over the years.

"We brought in what we could and Jennifer stayed and she had some art and she has some pretty loyal artists with her and so several of them have stayed and some others have come back on," Wylie said. "So, we decided it is going to be a gallery again and here we are."

"So, we're trying to make it a co-op again for the artists in the gallery as Brandon did," Paprock said. "Several of the Brandon people have come back to the gallery. So, we charge a monthly fee and they get a certain amount of space and, you know, we hang their work. Just like any other co-op would do."

The goal, they said, was to bring in more fine and original works of both juried art and creative sculpture. They don't anticipate requiring artists to sit in the gallery. 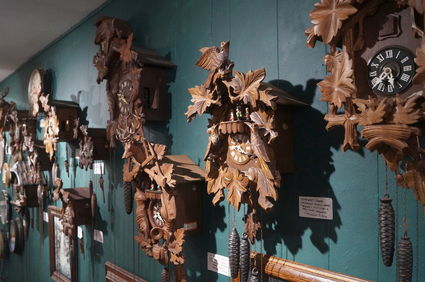 A large collection of collectible clocks is on display at 105 N. Main Gallery.

They will also use the space to host special events including artist's openings, shows, receptions and instructional and art classes for adults and children.

"We want this space to benefit the Fallbrook community itself," Wylie said. "The purpose of that is to get more people interested in any kind of creating or creativity or art in addition to giving the artists that are hung here more exposure."

Wylie, a longtime Fallbrook architect is planning to use the space to do some architectural work and consultation.

Experienced art instructors are already scheduled for classes and events which have already started and will begin again after the holidays in January.

Interested people who want more information on how they could participate in the gallery space, should call the gallery at (760) 451-6452.